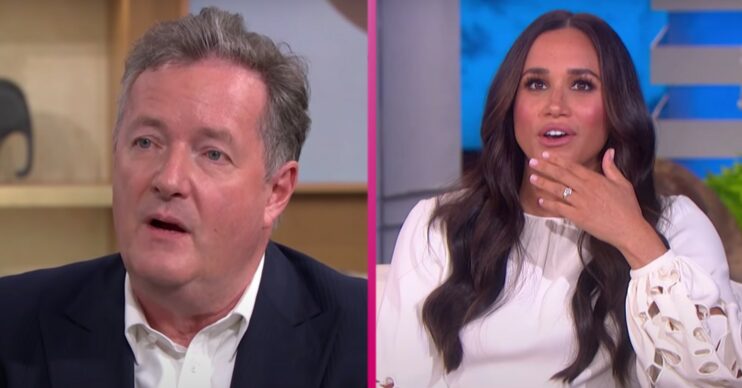 Piers, 56, took aim at the Duchess of Sussex for her appearance as a guest on the last season of the host’s talk show.

It was Meghan’s second TV interview since she and Prince Harry moved to the US. They also spoke with Oprah Winfrey earlier this year which generated headlines for weeks afterwards.

Other Twitter users seemed divided about Piers’ potshot – but nobody could have been surprised the former GMB host had withering words for his familiar foe.

What did Piers Morgan tweet about Meghan Markle on Ellen’s show?

Piers wrote: “Are they discussing bullying in the workplace?”

His words seemed to refer to controversies that have engulfed both Meghan and Ellen previously.

Meghan has been accused of reportedly “bullying” royal aides and Ellen has also come under fire for “toxic workplace” claims.

The Sun reported that nine members of staff resigned during Meghan’s time as a working royal. Two nannies also reportedly left within weeks of being tasked with looking after baby Archie.

There were also claims staff members were left in tears due to the alleged bullying.

However, Meghan’s legal team insisted the claims were part of a “calculated smear campaign”.

And an internal probe was launched after ex-staff members on The Ellen Show swapped stories on Twitter, making claims about bullying and racism.

Piers’ gag  proved popular with his Twitter followers, rapidly picking up thousands of Likes and hundreds of other engagements.

Many of those appreciating Piers’ remarks were clearly no fan of Meghan or Ellen themselves.

Are they discussing bullying in the workplace? https://t.co/AwuyhZVA4r

“Ugh. Irritating, nauseating and just tiresome,” responded one follower, presumably about the subject of Piers’ tweet, rather than him (although that wasn’t clarified).

Someone else reacted: “I shouldn’t laugh because it’s true but I have to admit that tweet did make me giggle.”

And another tweeter claimed: “Piers always asking the right questions.”

However, many other social media users leapt to Meghan’s defence, hitting out at Piers’ latest attack.

“Do you spend every minute of your day obsessing about her?” one person fiercely lashed out at him.

Someone else tweeted at him: “I hope she’s paying rent for all the headspace you give her.”

And a third person coolly put Piers down: “She’s certainly not talking about you.”