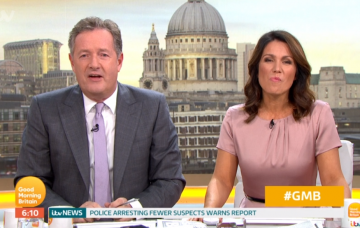 He was annoyed GMB wasn't nominated for an award

Piers Morgan made a cheeky dig at Ant McPartlin after he and co-star Dec Donnelly won a TV Choice Award on Monday night.

Ant and Dec bagged Best Entertainment Show for Saturday Night Takeaway and Best Reality Show for I’m A Celebrity… Get Me Out Of Here!

However, during Tuesday’s Good Morning Britain, Piers questioned Ant winning the Best Entertainment Show trophy for Takeaway when he took time off during the final two episodes to deal with personal issues.

He said: “I’ve decided not to go to any more awards ceremonies. My award comes every day from you the viewers when you tune in ever larger numbers, that is the award that I like to receive.”

Hitting out at Ant and Dec for winning an award for Saturday Night Takeaway when Ant missed two of the episodes, Piers added: “Ant and Dec winning everything when one half of them isn’t even there is ridiculous, isn’t it?

“At least I pitched up for work.”

There were six episodes in the last series of Takeaway, meaning Ant co-hosted four of them.

Of course, Piers is actually good friends with Ant and Dec, so it was all in jest.

On Monday night, Ant and Dec added another two awards to their growing collection.

Dec, who recently welcomed his first child with wife Ali Astall, took to Twitter last night to thank fans for voting for them.

He wrote: “Wowser! Thanks everyone who voted! You’re the bestest! D.”

Wowser! Thanks everyone who voted! You’re the bestest! D 🙏 https://t.co/cBda2Y6KPl

In a second tweet after it was announced they had won Best Reality show, Dec added: “Another one!? Yahooo!!! Thank you, thank you! D.”

Last year, Ant entered rehab to tackle drink issues and painkiller addiction but returned to TV to present I’m A Celeb alongside Dec in November that year.

He was also by Dec’s side on the new series of Saturday Night Takeaway, which began in March this year.

But, Dec had to present the final two episodes of the show himself, after Ant was involved in a drink-drive crash in London.

Dec, 42, also hosted the Britain’s Got Talent finals on his own.

Last month, it was announced that Ant would be taking the rest of the year off to focus on his recovery.

He released a statement which said: “My recovery is going very well and for that to continue having spoken to Dec and ITV, I have made the decision to take the rest of the year off.

“I’d like to thank both Dec and ITV for their continued support and I look forward to getting back to work in the new year.”

Dec will be co-hosting I’m A Celeb this year with This Morning presenter Holly Willoughby.

Will you miss Ant on I’m A Celeb this year? Are you looking forward to seeing Holly co-host with Dec? Leave us a comment on our Facebook page @EntertainmentDailyFix and let us know what you think!