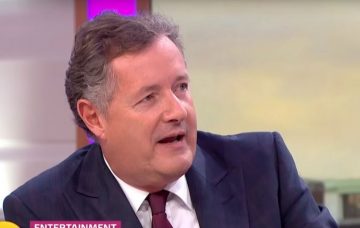 Why? Well, because Mr Morgan lost a bet!

If you cast your minds back to last year, Piers had bet £100 during a live Good Morning Britain interview with Iain that none of the couples from the show’s third series would be together within a year.

Unfortunately for Piers, there are TWO couples from that series still together!

Jessica Shears and Dom Lever are engaged, while Camilla Thurlow and Jamie Jewitt are still going strong, too.

Piers asked Iain: “Are any of these wretched people still together?”

When Iain gleefully told him the answer was yes, Piers produced a comedy sized cheque for £100 made out to Iain.

He said: “Okay, well I’m a man who honours his bets so here we are. From the Bank of Piers Morgan. £100 or, as I like to call it, twenty seconds work. Here you go, mate.”

Iain pledged the cash to charity and assured Piers the money would go towards a “worthy cause”.

When Piers’ co-host Susanna Reid remarked that Iain and Laura are marking their one-year anniversary, Piers remarked: “You’re with Laura Whitmore? I didn’t know that! I didn’t realise you were actually an item!”

Once he’d established Iain and Laura are, indeed, an item, he couldn’t resist asking if a proposal was on the cards.

But playing coy, Iain brushed off the question by joking he wouldn’t be doing it while Piers was watching!

He added: “You know what I feel really bad, because whenever I speak to a couple in the front row of my comedy show, I always try and make the man propose. And now I realise what a terrible, awful thing that is to put someone on the spot like that.”

Did you think Iain or Piers would win the bet? Leave us a comment on our Facebook page @EntertainmentDailyFix and let us know what you think!