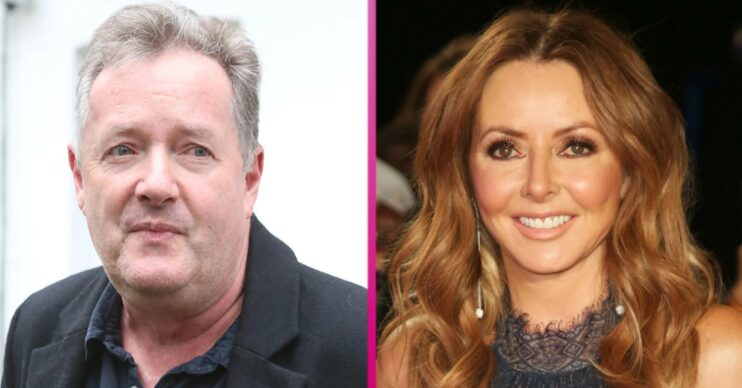 'It's like seeing your nan and grandad flirting online'

Piers Morgan has left his Twitter followers cringing after posting a ‘creepy’ compliment to Carol Vorderman.

The former Good Morning Britain star, 56, posted the cheeky remark as Carol reshared one of his posts.

Piers had initially complained over the British weather in a tweet.

He posted: “First August I’ve spent in the UK since 2005… and it will be the last. Seen better Januaries than this.”

Carol, 60, then responded: “You should come up Wales P… it’s roasting here.”

The comment didn’t go unnoticed by Piers, who quickly replied to the former Loose Women panellist.

The host said: “I was thinking of somewhere a little hotter C, though having seen your recent Instagram pix…”

Piers also added a series of flame emojis to the post.

It came after Carol shared a saucy shot of herself soaking up the sun in a bikini yesterday (August 9).

I was thinking of somewhere a little hotter C, though having seen your recent Instagram pix… 🔥🔥🔥🔥 https://t.co/0BCfex6q2G

However, Piers remark appeared to cause a frenzy with his followers.

One shared: “Why do I feel really uncomfortable reading this post.”

A third joked: “Carol is gold medal Piers, way out of your league.”

In addition, a fourth said: “Oh mate, how embarrassing for you.”

“Was this meant to slide into her DM’s,” a fifth wrote, while another stated: “Ew! Like seeing your nan and grandad flirting online.”

It isn’t the first time Piers has publicly complimented Carol.

Last year, the host offended GMB viewers after he asked Carol to dress up in a maths teacher uniform as she discussed her maths programme on the show.

At the time, he joked: “Now you’re talking, are you going to wear a mathematical uniform for this? One of the ones adults might enjoy, you know Carol?”

Carol then added: “I’ll tell you what I am not going to do, Piers, which is probably what you would like me to do, it’s teach you how to write ‘boobs’ on a calculator.”

Meanwhile, the former Countdown star has continued to delight her fans with a series of saucy posts.

In her latest snap, the star poured her curves into a red and blue bikini as she posed in Wales.