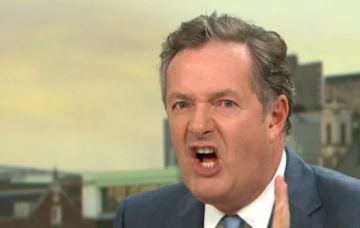 Seems like Piers has had his fill of vegan sausage rolls

It may be a new year but Piers Morgan is revisiting an old feud to help kick off 2019.

Having been tied up rowing with Twitter users about vegan sausage rolls for the past few days, it seems the former journalist has returned to sinking his teeth into Little Mix to occupy himself – branding them ‘talentless dimwits’.

The Good Morning Britain host seized upon the chance to reignite his war of words with the pop foursome after they touched upon his previous criticism of their promotional stunt for single Strip in which they stripped off and were covered in gendered slurs.

“What is empowering about this?,” Piers questioned at the time.

Take off all my makeup cos I love what’s under it Rub off all your words don’t give a fuck I’m over it Jiggle all this weight, yeah you know I love all of this Finally love me naked Sexiest when I’m confident. Thank you for being part of this incredible journey with us. #LM5 featuring #Strip is coming Friday 16.11.18 The girls x

“Get your kit off, airbrush yourself to within an inch of your lives. What’s the point of it? Using nudity to sell their album.”

And although band members Jesy Nelson, Leigh-Anne Pinnock, Perrie Edwards and Jade Thirlwall have already endured a back and forth with Piers over the issue, it seems the two sides have yet to make up and move on.

Revealing that bad feeling exists on Little Mix’s part, the former X Factor act suggested to The Guardian they were wary to address Piers’ views because he thrives on the attention.

“It’s not about sexualising yourself; it’s about having a voice and speaking out and being brave enough to stand up to people,” Jade told the newspaper’s Guide supplement.

She continued: “What was amazing, actually, is that we haven’t had to say much [to him], as women have rallied together to defend us.

“I mean, he’s, you know, ugh… I don’t want to dwell too much on it, and he doesn’t deserve a line on it because he’s obviously loving it.”

However, merely mentioning Piers was enough to get his attention – and he kicked off this afternoon with a typical lack of restraint.

Taking the bait, the 53-year-old reacted by sharing his disdain for Little Mix’s comments with his 6.5 million Twitter followers after spying a headline that claimed they don’t have any time for him.

“I can’t hang out with those foul-mouthed, talentless, clothes-allergic little dimwits? Gutted,” came his undignified response.

Even the most ardent of Piers supporters had mixed feelings about his reply – although many of those supporting him also let themselves down by hurling many slurs similar to those daubed on the singers as they defended the ex editor’s position.

“Is that why you can’t stop mentioning them?” asked one fan.

Another added: “Not a very respectful way to talk about young women.”

However, one other supporter tweeted: “I don’t like piers but this is funny.”

And another continued: “One of the most apt descriptions I’ve ever heard.”