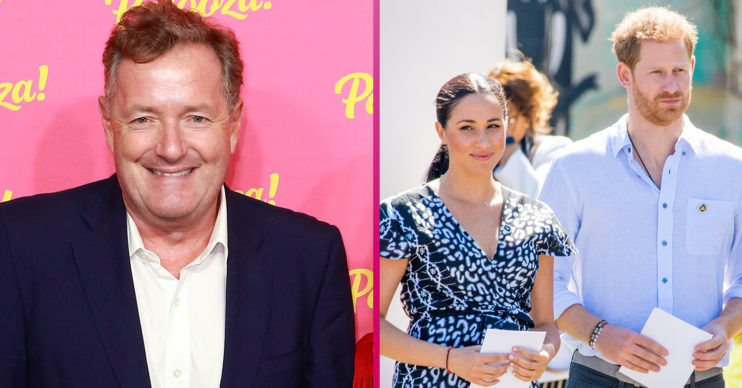 In latest Piers Morgan news, the presenter said he would interview Meghan Markle and Prince Harry.

Following his exit from Good Morning Britain, Piers has had his say in a couple of TV interviews on US telly.

Now, speaking to Extra TV’s host Billy Bush, the star said he would ask “more difficult questions” than Oprah Winfrey if he were to sit down with the Duke and Duchess of Sussex.

What’s the latest on Piers Morgan?

Piers said: “I would say to Meghan Markle, look, sit down with me with your husband for an equally long interview to the one you gave Oprah Winfrey.

“And let me ask you more difficult questions about all your claims.

“But let me ask you a wider question, if you hate the royal family that much why do you keep your titles?

“Why do you keep calling yourselves the Duke and Duchess of Sussex, why? Why would you do that if it’s not just to make millions and millions of dollars.

“Playing the victim as you do is frankly nauseating.”

Let me ask you more difficult questions about all your claims.

Last month, Harry and Meghan sat down with Oprah Winfrey for a tell-all interview about their royal exit.

They made a series of claims and revelations about the royal family.

What did Meghan say in the Oprah interview?

One included Meghan alleging there were ‘concerns and conversations’ about their son Archie’s skin tone before he was born.

Meghan also said she felt suicidal during her pregnancy but claimed she didn’t receive help from the Palace.

Following the interview, Piers criticised the couple on Good Morning Britain and said he didn’t believe the Duchess which sparked thousands of viewers to complain to Ofcom.

During one episode, he stormed off set after weatherman Alex Beresford accused him of “trashing” Meghan.

Later that evening, ITV announced Piers had quit the programme.

Speaking to Fox host Tucker Carlson on Monday (April 5), the presenter hit out at Alex and accused him of a “premeditated attack”.

He said: “The moment he came on air, he came with a pretty premeditated attack on me on a pretty personal level and frankly I just wasn’t going to have it.