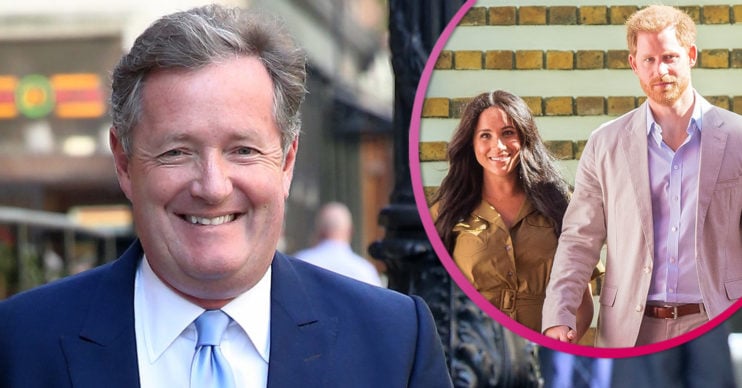 "Name them Piers... you said Markle should"

In latest Piers Morgan news, the star is being urged to name the royals who reportedly sent him messages of “gratitude”.

The former Good Morning Britain host recently claimed he had messages communicated to him on “behalf of several members of the royal family”.

It came after his controversial comments about Prince Harry and Meghan Markle‘s Oprah interview.

What’s the latest on Piers Morgan?

Speaking to Extra TV’s host Billy Bush, the star said: “I’ve had some messages communicated to me on behalf of several members of the royal family.

“I’m not going to go into who it was but what I would say is, gratitude that somebody was standing up.”

Now, fans have urged Piers to reveal who sent the messages after he demanded Meghan and Harry name the royal who allegedly made a comment about their son Archie’s skin colour.

In their Oprah chat, Meghan alleged there were ‘concerns and conversations’ within the family about how dark Archie’s skin would be when he was born.

Piers called for the couple to reveal who said the alleged comment.

Now, fans are asking him to do the same on Twitter.

One person said: “Name them Piers… you said Markle should. Why don’t you?”

Another wrote: “I think he should name the Royals that reached out to thank him. Isn’t that what he wants Harry to do? Lead by example.”

One added: “So HE doesn’t have to name the royals who texted him, but Meghan has to reveal their identities…?

“We are ALL tired of the double standards.”

Meanwhile, it comes after Piers said he would sit down with Meghan and Harry for an interview like their Oprah one.

However, he said he’d ask them “more difficult questions”.

Speaking on Extra TV, Piers said: “I would say to Meghan Markle, look, sit down with me with your husband for an equally long interview to the one you gave Oprah Winfrey.

“And let me ask you more difficult questions about all your claims.

“But let me ask you a wider question, if you hate the royal family that much why do you keep your titles?

“Playing the victim as you do is frankly nauseating.”

What do you think of Piers’ comments? Leave us a comment on our Facebook page @EntertainmentDailyFix and let us know.