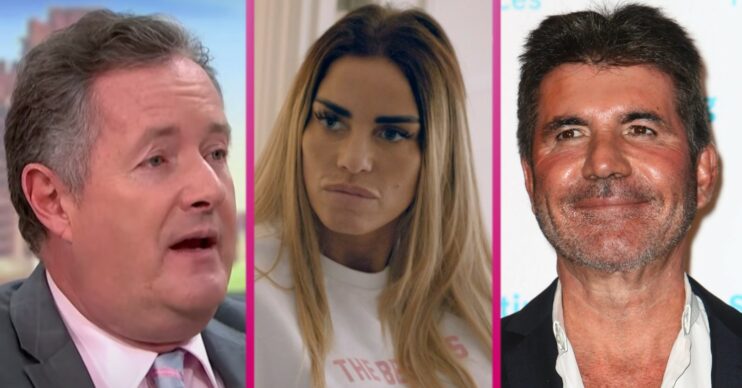 Claims she flashed Boris Johnson at an "outrageous" party, too

According to Piers, the former glamour model also ‘talked dirty’ to him at another showbiz bash, too.

Piers’ claims came during his recent column for The Sun in which he told Katie to ‘wake up’.

During the course of his lengthy article, Piers indicated Katie was furious when Simon turned down her reported advances.

Piers noted he and Katie have been pals for twenty years. But now it seems he hopes she can ‘pull herself together’ following personal and legal woes.

Read more: Bridgerton: Where did we leave Marina Thompson in season 1?

The ex newspaper editor recalled: “I remember you stumbling towards me at Simon Cowell’s 50th birthday party, where you’d morphed into full-on Jordan as the night wore on, and expressing your indignant rage that the birthday boy had just declined your offer of a risqué sexual gift.”

You’d morphed into full-on Jordan as the night wore on.

Former GMB co-presenter Piers, 57, then spared the blushes of his readers by declining to reveal Katie’s allegedly saucy words to him.

Piers continued in the tabloid column: “I remember bumping into you at the National TV Awards and asking if you were intoxicated. ‘I’m not drunk yet,’ you laughed, ‘but I will be soon and when I am, watch out Morgan!’

“Then you explained exactly what you would do to me, which I’m afraid is not repeatable in a family newspaper!”

He speculated such behaviour adds to Katie’s ‘legend’ status.

But Piers apparently believes she has now ‘jumped the shark’ from being “an amusing entertainer to embarrassing train-wreck”.