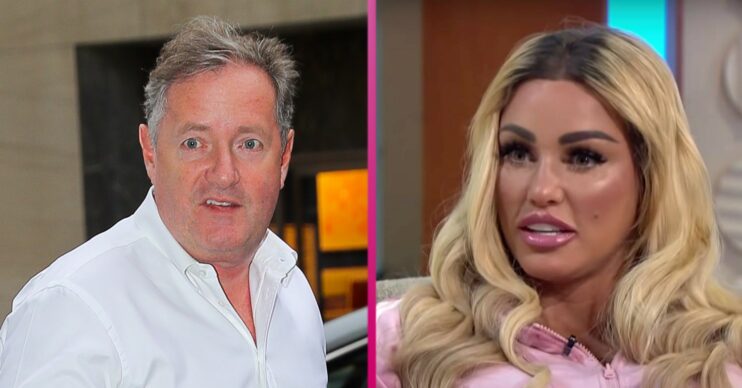 Piers Morgan has issued a desperate plea to Katie Price in his latest column, begging the star to “wake up”.

The 56-year-old didn’t hold back in his lengthy plea to the former glamour model, as he claims that she’s “spiralling completely out of control”.

Piers took matters into his own hands by issuing Katie with a huge reality check in his latest column for The Sun. In the lengthy article, Piers begs his friend to “wake up” before anything worse happens to her.

Piers’ pleas to the former glamour model come after a tough few months for the 43-year-old. In December, Katie narrowly avoided prison time after rolling her car in a drink-driving smash.

The mum-of-five is also due to appear in court this month for allegedly breaching the restraining order the fiancée of her ex-husband, Kieran Hayler, has against her. She has also recently split with her fiancé, Carl Woods, amid allegations that she was ‘cheating’.

The 43-year-old also recently bought a new pink Ferrari – which seems to have been the final straw for Piers.

“You’re spiralling completely out of control, and this won’t end well if you don’t wake the [bleep] up pretty damn sharpish and pull yourself together,” he wrote.

Piers then went on to say that Katie seems to be on a “one-woman mission” to self-destruct – something he says is breaking his heart to watch.

The 56-year-old then went on to list some of the controversies Katie has been involved in recently – including her drink-drive crash, being declared bankrupt, and being accused of cheating on Carl.

Piers went on to discuss the drink-drive crash some more. He said that it should have given Katie a reality check. However, he revealed that his “heart sank” when he saw that she’d reportedly bought a £179k Ferrari recently.

Her excuse that she had bought it to reward herself for all she’d been through hasn’t gone down well with Piers either.

Piers then went on to say that he fears what she may do next.

“To be blunt: I don’t want to wake up to news even worse than your horror smash,” he wrote. “And nor do your five kids, to whom you’ve been a great mother in between all the mayhem.”

Piers then went on to detail some of his run-ins with Katie over the years that have contributed to the “Pricey legend”.

The 56-year-old said that one of the main reasons he likes Katie so much is that she’s so “open, honest, and frank”.

He also expressed admiration for how she cares for her eldest son, Harvey, who is disabled.

However, Piers confessed that he is finding it hard to praise her at the moment, especially after the purchase of her new car.

Piers concluded the article by begging the star to wake up, if not for her sake, for her children’s.