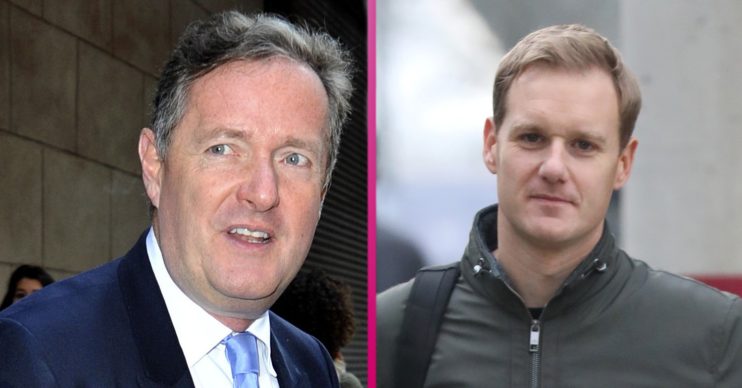 Piers Morgan has hit out at Dan Walker for presenting to a packed crowd of football fans.

The Good Morning Britain host took a swipe at his BBC Breakfast rival after Dan took on the task of interviewing football manager Arsène Wenger on Monday night (October 12).

The event took place at the London Palladium theatre.

In a clip from the event, Dan was seen standing on stage as he introduced the former Arsenal manager.

A loud swarm of chants and cheers could be heard in the background.

The video clearly didn’t go unnoticed by Piers, who was quick to call out his TV rival.

Piers shared the clip and wrote: “This makes no sense.

This makes no sense.
Can you explain how you were able to have such a big crowd of football fans inside a theatre last night, @mrdanwalker ?
Genuinely curious. https://t.co/Vf3Z4jGUTY

“Can you explain how you were able to have such a big crowd of football fans inside a theatre last night, @mrdanwalker? Genuinely curious.”

Fans were quick to agree with Piers.

One commented: “Are you aware of this @BorisJohnson? What sort of a message is this giving to people who can’t even see their families. I’m shocked and disgusted!”

A second said: “How the hell did this get allowed??? This is an absolute joke and makes a mockery of everyone else who is following the rules and not to mention all NHS staff who are risking their lives daily!”

Another complained: “And yet you still can’t go to a football match in an OPEN AIR STADIUM.”

This is just the latest clash in a long-standing feud between the TV presenters.

In fact, Piers and Dan have been at each other for months!

He tweeted his rival: “The reason they all go on your show Dan is because you’re known as the softest touch in world political interviewing…

“Or as the Guardian called you recently ‘LaLa from the Telletubbies… most at home asking unthreatening lifestyle questions.'”