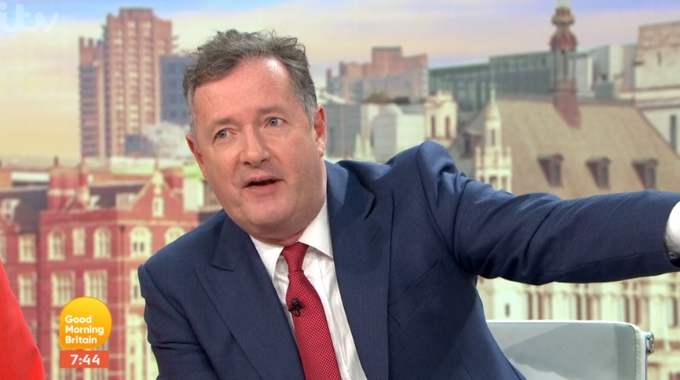 Remember: It's I before E except after C

Outspoken Piers Morgan isn’t a man you want to get on the wrong side of.

So pity the poor graphic designer who misspelled his name on Good Morning Britain today.

The blunder came to light as Andi Peters stepped into the studio to reveal the latest Good Morning Britain competition.

Piers had to interrupt to point out the error.

“Whoever did that graphic behind you and has spelt my name wrong is going to be fired,” Piers joked. “My name is not spelt like that.’”

“We’re having a fight over who should take the shot, literally,” said Andi in response as the cameras zoomed in to show the spelling mistake.

“Did they not remember I before E except after C?” asked co-presenter Susanna Reid.

Piers replied: “Do they not remember if you get Piers’ name wrong, you get fired? Yeah, that old mantra.”

But whoever that graphic designer is, they shouldn’t fear the wrath of Piers too much.

Susanna said she would back them with HR. Phew!

Earlier this year, Piers told OK! Magazine: “Both of us find each other vaguely irritating most of the time and barely agree.

Susanna admitted in the same interview that the pair, who started presenting Good Morning Britain together in 2015, still have arguments off air.

“I think he winds me up even more now. We still have rows off air.

“At the moment he is quite a wind up because he has a very, very strong view on the biggest story of the moment, Meghan Markle, and of course I take a very different view on her,” she said.

But the presenters admitted there is a mutual trust and respect which makes their love-hate relationship work.

@GMB @piersmorgan Is Andy wetting himself with fear over the spelling error? 🤣 pic.twitter.com/G7sYmBmFwf

On Twitter, fans were quick to acknowledge that no one wants to make Piers angrier than he already is. One pointed out that Andi Peters looked scared.

“Is Andy [sic] wetting himself with fear over the spelling error?”

We hope Piers got distracted by the next subject to get outraged over – be that Royals, vegan sausage rolls or another matter – and forgot about the plight of that poor graphic designer.

What do you think? Was Piers being unfair, or was it all part of the banter? Let us know what you think of this story on our Facebook page @EntertainmentDailyfix.