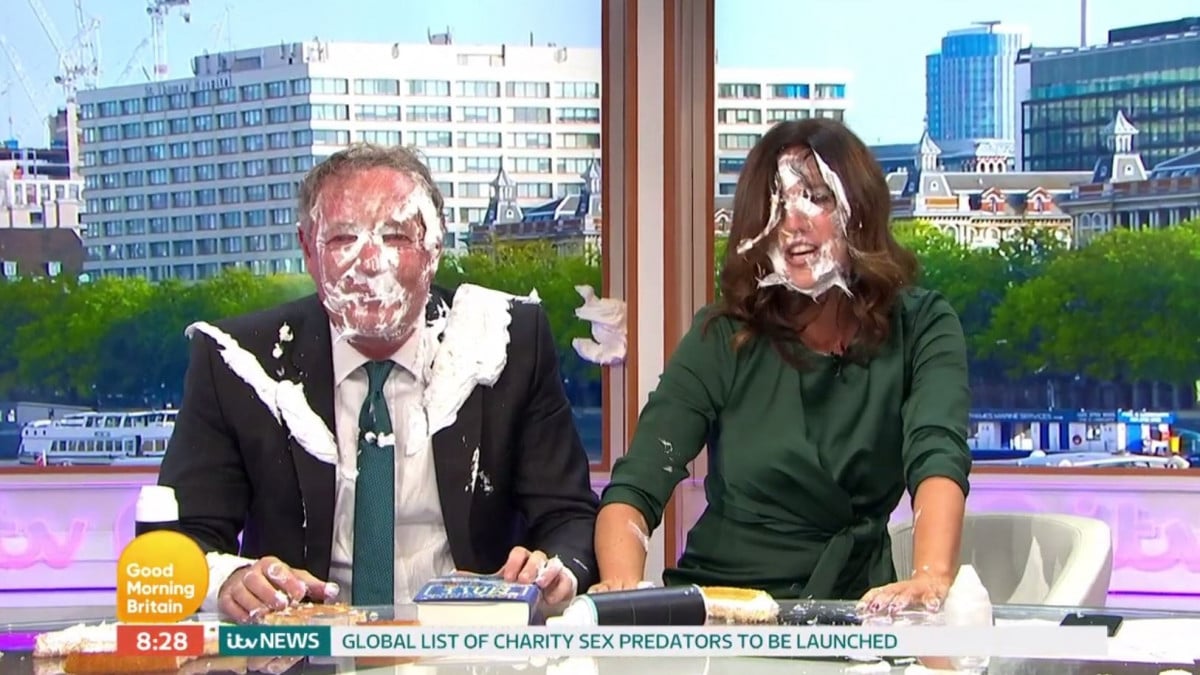 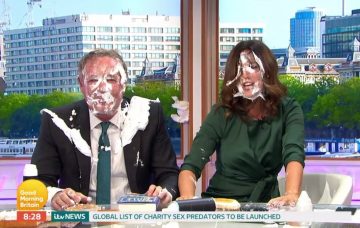 Piers Morgan was smashed in the face with a cream pie live on Good Morning Britain as payback for criticising men who carry their babies in papooses.

The presenter had previously sparked a heated debate about fathers who use the sling-like carriers after Daniel Craig was pictured wearing one.

Comedian Harry Hill, who appeared in Wednesday’s episode of the ITV programme, took it upon himself to seek revenge on Morgan while showing how to make a cream pie for comedic purposes.

Harry Hill has a parting thought for Piers on the papoose debate. See you soon @piersmorgan 👋@HarryHill | @susannareid100 pic.twitter.com/HuZcPVHNER

He covered a flan case with shaving foam, before slamming it into Piers’s face.

Harry said: “That’s for the guys that wear papooses, alright!”

Piers, apparently stunned, remained silent for a few moments, before hitting his co-star Susanna Reid in the face with his pie.

Susanna then stood up and rubbed a cream-covered pie all over Piers in retaliation.

The light-hearted altercation occurred after EastEnders actor Ross Kemp had appeared in the studio to take part in the papoose debate.

A child carrier, sometimes called a papoose, allows parents to walk with their children strapped to their bodies.

Ross, wearing a harness with a cuddly toy to indicate its practicality, said: “If I fall over now I have two hands to protect the child.

“If I have to carry the shopping, I can carry the bag in one hand, walk the dog or open the car door.

“It’s really good for babies. It’s good for their digestive system… it’s bonding with my baby. It makes you more of a man because it shows you care.”

Susanna added: “I think they set women’s ovaries in motion. There is nothing sexier than James Bond wearing one.”

Piers, 53, remained resolute in his opinion on papooses, which he first aired earlier in the week.

He had tweeted a picture of James Bond star Craig with his newborn daughter strapped to his chest, and wrote: “Oh 007.. not you as well?!!!” as well as the hashtag “#emasculatedBond”.

This sparked criticism from stars including US actor Chris Evans, who questioned why Piers was commenting on other people’s parenting skills.

He said: “You really have to be so uncertain of your own masculinity to concern yourself with how another man carries his child.

“Any man who wastes time quantifying masculinity is terrified on the inside.”

Meanwhile, on Tuesday night, Piers shared a snap of himself holding a toy baby on the red carpet at the ITV Palooza party.

On the red carpet tonight.. now THIS is how you hold a baby. #NoPapoose #ITVPalooza

He wrote: “On the red carpet tonight.. now THIS is how you hold a baby.”

What is your opinion on papooses? Leave us a comment on our Facebook page @EntertainmentDailyFix and let us know what you think!