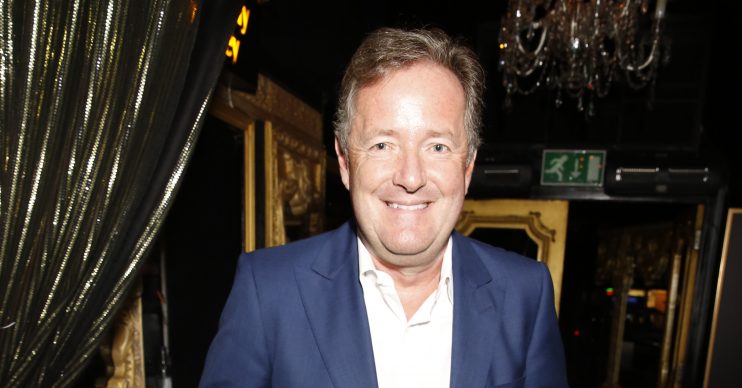 Television star and journalist Piers Morgan has shared a special glimpse into his family life – and how he bonds with his young daughter – on Instagram.

The clip, shared with his 898,000 followers, shows Piers loudly cheering “Come on” as his daughter smiles and his son Albert repeats the phrase but in slightly more subdued fashion.

Piers, 54, is an avid Arsenal fan and was no doubt thrilled with their 1-0 result against rival team West Ham.

He also shared an adorable snap of Elise wearing an Arsenal top and scarf and declared in the caption that it was her “First Arsenal game!”

However, several of Piers’ fans couldn’t help but poke fun at his remark, who clearly weren’t supporters of the London based team.

A further fan mocked: “Feel bad for her” and another wrote: “Poor kid”.

He went on to share a snap with the Arsenal mascot, dinosaur ‘Gunnersaurus’ with his children and was ‘photo-bombed’ by football legend former Arsenal player Robert Pires.

He captioned the photo with: “When your nice family snap with Gunnersaurus gets photo-bombed by one of the greatest Arsenal players in history…”

Elise is his only child with second wife, journalist and novelist Celia Walden.

He has three sons – Albert, Spencer and Stanley from his first marriage to nurse Marion Shalloe.

The proud dad regularly shares pictures of his children on Instagram and even shared a selfie back in the New Year with his daughter seemingly mocking Greta Thunberg.

Piers has often mocked the young activist on GMB and across social media, and in this instance captioned the post by insinuating that Elie was doing an impression of the Swede.

His caption included: “I’m going to do my Greta Thunberg face, Dada… because you’ve stolen my childhood too!”

The mockery didn’t go too well this time with some of his followers, with several calling it out as inappropriate.

One wrote: “Hope you feel proud of making your daughter a troll too” and another scolded: “Small minded little man.”

What do you think of Piers’ family bonding time? Share your thoughts with us on our Facebook page @EntertainmentDailyFix.