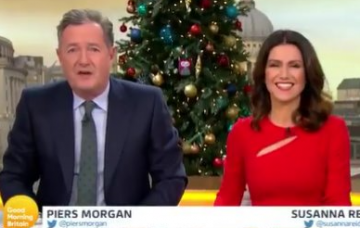 He joked it was “the end” when feeling under the weather on Good Morning Britain this week, but Piers Morgan’s case of supposed ‘man flu’ has become so bad he’s had to go to hospital.

It came just hours after Dr Hilary Jones told Piers he was “over the worst” of his illness on GMB.

Piers explained on this Wednesday’s show: “Doctor Hilary yesterday diagnosed me and said, ‘Don’t worry you’re over the worst’.

“I ended up in hospital yesterday and got diagnosed with bronchitis, laryngitis and Sinusitis. Thanks Hilary.”

The sulky-looking presenter then proceeded to wish his Instagram followers a “Merry Manflu Christmas!”

Piers realised he needed some serious medical attention after complaining about having “breathing difficulties”.

GMB even began a Twitter poll asking if he should stay at home in bed!

Piers is full of cold at the moment – should he stay at home in bed tomorrow or come in for the show?

The 53-year-old broadcaster also revealed the extensive medication doctors gave him on his hospital trip yesterday.

He joked: “I’ll be at my @gmb work station tomorrow if it kills me, which at this rate it might just do.”

HEALTH UPDATE: Man-flu now upgraded to bronchitis, sinusitis & a dash of laryngitis. The trifecta of hell for TV presenting. Doc’s given me this lot to ‘nuke it all away.’ I’ll be at my @gmb work station tomorrow if it kills me, which at this rate it might just do.

Luckily, it was Piers’ last stint on GMB today as he now has a two-and-half-week break for the festive holiday.

We hope you’re better in time for Christmas, Piers!

Have you ever had flu over Christmas? Leave us a comment on our Facebook page @EntertainmentDailyFix and let us know what you think.