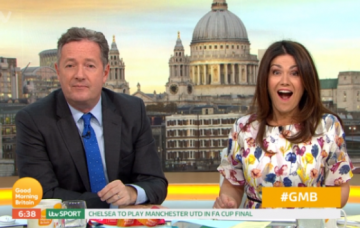 Celebrities have been rallying round to support ten-year-old George Mathias, who has pledged to run 75 miles to raise money for Alder Hey’s Children Hospital.

The school boy from Saint Helens has asked stars to join him to run a mile – and donate to his good cause at the same time. So far he’s run with Peter Andre, Susanna Reid and footballer Michael Owen, among other big names from the world of sport and showbiz.

On Monday’s show, she broached the subject, telling him: “You said you wouldn’t run a marathon. On Friday, I did a charity run of a mile long with a lovely little boy called George Mathias.

“Run With George is the charity and he was our Young Fundraiser Of The Year at the Pride Of Britain Awards.”

She continued: “I ran a mile and I need to nominate someone to run a mile, so seeing as you are not going to run a marathon, Piers Morgan, how about you run a mile with George?”

However, he said he would instead pay not to run with George!

He added: “George gets to not to run with me, tick, he gets a cheque for his charity, tick, and I don’t have to have chapped thighs and bleeding legs and broken toe nails. Everyone is a winner!”

“Brilliant stuff!” Susanna replied, giving him a round of applause.

George was delighted when Piers stayed true to his word and later donated to his cause via his online fundraising page.

Sharing evidence of Piers’ donation, he tweeted: “Thank you so much @piersmorgan for making your wonderful donation and your lovely message on my fundraising page. You are definitely a man of your word. If you’d like to nominate anyone to run, or not to run, next, please do!! #runwithgeorge.”

Piers then went on to nominate Sir Mo Farah! George said he would be delighted to run with the multiple Olympic champion, who finished third in Sunday’s London Marathon, tweeting: “Oh…..my……!!!”

Here’s the moment my fantastic friend @susannareid100 got @piersmorgan to donate £1000 so he DOESN’T have to run a mile with me! Fantastic work thanks Susanna!! Anyone else wants to donate NOT to run with me just let me know!! 🤪😂😀 #runwithgeorge pic.twitter.com/1nP5jJHz07

George said they could have started a new trend, and he’s happy for other celebs to donate to not run with him!

“This is amazing Susanna!! Thanks for getting @piersmorgan to donate to NOT run with me! If any other celebrities would like to donate £1000 NOT to run with me I’d love to hear from you,” he tweeted.

He also shared a video of the moment Piers promised to pay him £1,000, writing: “Here’s the moment my fantastic friend @susannareid100 got @piersmorgan to donate £1000 so he DOESN’T have to run a mile with me! Fantastic work thanks Susanna!! Anyone else wants to donate NOT to run with me just let me know!! #runwithgeorge.”

At last year’s Pride of Britain Awards, George got dozens of the celebrity guests to donate to Alder Hey by running around the ceremony with a bucket.

His biggest supporter was Dragons’ Den star Duncan Bannatyne, who gave him a huge £10,000.

George has been tirelessly raising money for the children’s hospital after medics saved the life of his brother, James.

On his charity page, he explains: “When I was four, I got the best present I could ever wish for, my little baby brother James. Like me, he was born premature, but he became ill and ended up in a coma at Alder Hey Children’s Hospital.

“They saved his life and gave me back my new best friend. James is now six, so to say thank you, and to try to help other children, I am running a mile for every month I have had my brother. That’s 75 miles and counting. It’s going to take me a while!”

So far George has raised more than £52,000! If you would like to donate, visit his fundraising page