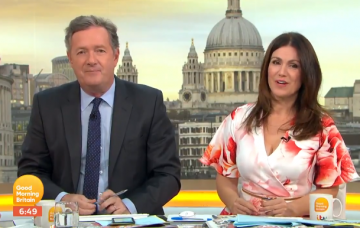 Danny's daughter is currently on the show

Piers Morgan has said Danny Dyer will probably “punch” him during Good Evening Britain on Thursday.

But Piers has now realised being quite so vocal about disliking Love Island could have been a major mistake on his part!

During Wednesday’s GMB, Piers, 53, explained that Danny will be a guest on a one-off special of the breakfast show straight after England’s game against Belgium in the World Cup.

Over the past few weeks, Piers has made his feelings very clear about the ITV2 show, even calling the contestants “halfwits”.

And it seems as he prepares to come face-to-face with Danny, who plays Mick Carter in the BBC soap, he’s getting a little worried.

“We’ll have all the fallout, all the talk, all the chat, all the emotion.

Don’t forget to adjust your alarm for Good Evening Britain tomorrow at 9.15pm on @ITV @MrDDyer is on the guest list… @piersmorgan is predicting a good scrap! 🙈 pic.twitter.com/r9YC2rXPdH

“We’ve got Danny Dyer…probably going to punch me at some stage. If that doesn’t get you watching, nothing will.”

Piers even tried to get in Danny’s good books by praising his daughter for being a “ray of sunshine in a sea of stupidity”.

The host joked he didn’t “fancy having a rumble” with Danny and sent a message to the hardman actor himself.

He said: “The only one I know in Love Island is Danny Dyer’s daughter who is an oasis of intelligence, beauty and charm in an ocean of dim-wittery.

“That’s got nothing to do with Danny Dyer coming on the show live tomorrow night [for Good Evening Britain].”

Piers then said he wanted to “divorce any comments” he’s made about the islanders “being a bunch of braindead zombies” from Dani.

Speaking to Danny, Piers added: “Danny senior, if you’re watching, nothing I’ve said about the show or its inhabitants has anything to do with your daughter.

“She is a ray of sunshine in a sea of stupidity.

“I genuinely mean that and hope you see this message because I’ve seen your series Hardest Men in Britain and don’t really fancy having a rumble, son.”

Meanwhile, Danny, 40, has admitted he’s missing his daughter as she continues her stint on the reality series.

Danny penned a touching message to Dani on Twitter on Sunday night, shortly before she and fellow islander Jack Fincham officially became girlfriend and boyfriend.

He wrote: “I know she’s doing well… holding her own and all that [expletive]… but it’s gotta be declared… I proper miss my baby girl now.”

Will you be watching Good Evening Britain? Leave us a comment on our Facebook page @EntertainmentDailyFix and let us know!