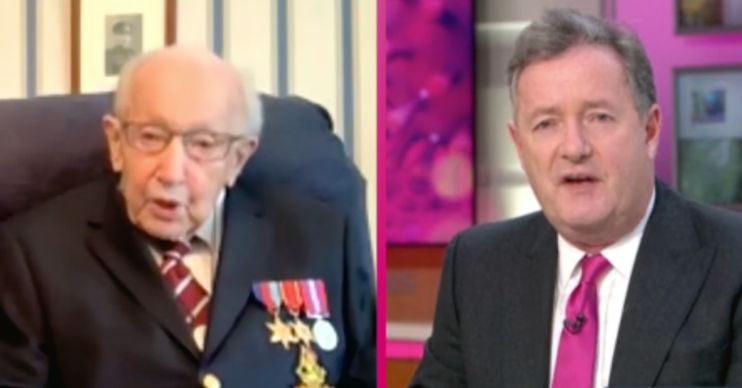 TV’s Piers Morgan has led the calls for war hero Captain Tom Moore to be awarded a knighthood.

The 99-year-old war hero has raised almost £8 million for the NHS.

Captain Tom was determined to raise £1,000 for NHS Charities Together by walking 100 lengths of his garden with the help of his zimmer frame.

However, he has far exceeded his target.

As a result of an appearance on Good Morning Britain, Tom’s video went viral.

Piers is now calling for Captain Tom to be knighted by the Queen.

I’d like to see the magnificently inspiring ⁦@captaintommoore be knighted for his services to his country.

He added: “He’s 100 on April 30th. Wouldn’t it be great if we didn’t feel temptation to give it to business people, who pay money for the honour, or to celebrities for singing nice songs. But we give it to someone like him. That we make him Sir Tom.”

Piers concluded: “If you’re with me, let’s get a campaign going and let’s give him something back.”

He then took to Twitter to tell his followers about his campaign.

“I’d like to see the magnificently inspiring ⁦@captaintommoore be knighted for his services to his country in WW2 & now to the NHS. Who’s with me?” he asked.

It appears many of Piers’ followers were with him because 2,500 people replied.

I’d like to see the magnificently inspiring ⁦@captaintommoore⁩ be knighted for his services to his country in WW2 & now to the NHS. Who’s with me? pic.twitter.com/XMvCZWUdq1

One said: “100% should be knighted – war hero plus a true gentleman and an inspiration!”

A third said: “He’s inspired so many around the world! He’s another of Britain’s great heroes.”

“Without a shadow of a doubt. This guy deserves serious recognition. Cannot think of a more deserving recipient,” another said.

Some even said Captain Tom should have an NHS hospital named after him as a result of his efforts.

I’m Captain Tom Moore, war veteran, 99 years of age (soon to be 100) and I’m walking for the NHS to raise money for our heroes.https://t.co/M1dkvoV3kE

“I’d also like a NHS hospital named ‘The Captain Tom Moore’ hospital. Outside should be a statue of him, in his blazer, with his badges with his zimmer frame as a reminder to us how much one person can do, even at his age, when they choose to act,” they said.

He clearly believes in the campaign because Piers has donated £10,000 of his own money to Captain Tom’s cause.

You can donate to Captain Tom’s fundraising effort here.