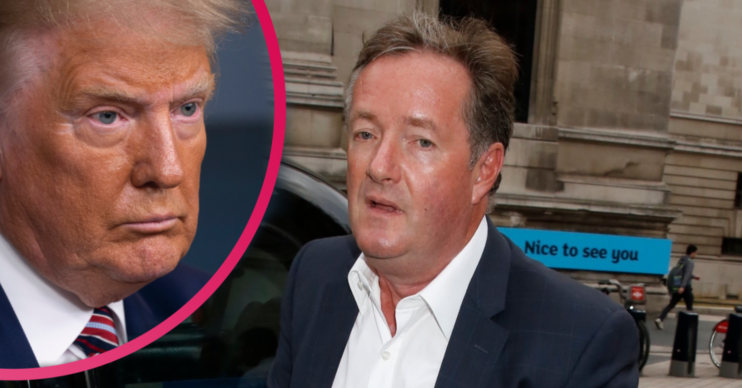 Says they're neither "tolerant nor kind"

Piers Morgan has blasted trolls who have celebrated US president Donald Trump testing positive for coronavirus.

The GMB host, 55, took to Twitter to slam the sick comments.

The news broke in the early hours of this morning (Friday October 2) that Mr Trump, 74, and his wife, First Lady Melania Trump, had caught the virus.

As the news circulated around the world, internet trolls took to social media to make jokes and call for the president’s death.

That’s when Piers stepped in.

What did Piers say in response to a Donald Trump troll?

One Twitter user said: “Just so we’re clear here: I hope he dies.”

Nobody’s been more critical of Trump over covid than me. But I don’t want him or his wife to die from it. Those who do are despicable. https://t.co/Ii72dGJZA3

What else did Piers Morgan say?

Another Twitter user replied to Piers, saying: “You can’t deny that it’s ironic that a guy who said it was a hoax and that it would magically disappear has now contracted it.

“He has also been so lame in dealing with it that the US is in a terrible mess.

Piers replied: “Nobody’s been more critical of Trump over Covid than me.

I don’t want him or his wife to die from it.

Tonight, @FLOTUS and I tested positive for COVID-19. We will begin our quarantine and recovery process immediately. We will get through this TOGETHER!

What did Donald Trump say when he broke the news?

Mr Trump shocked the world when he tweeted a message confirming he and his wife’s positive tests.

“Tonight,” he began, “@FLOTUS and I tested positive for COVID-19.

“We will begin our quarantine and recovery process immediately.

“We will get through this TOGETHER!”

Then you’re neither tolerant nor kind. https://t.co/ZbMV7iLOCl

As ever, Piers got in the last word.

Piers shot back: “Then you’re neither tolerant nor kind.”