TV's Piers Morgan has hit back at his critics after being slammed on Twitter for "picking on" outspoken climate activist Greta Thunberg.

The Swedish teenager, 16, shared the news with her followers on Twitter that her tour of North America had taken her as far as the shores of the Pacific. 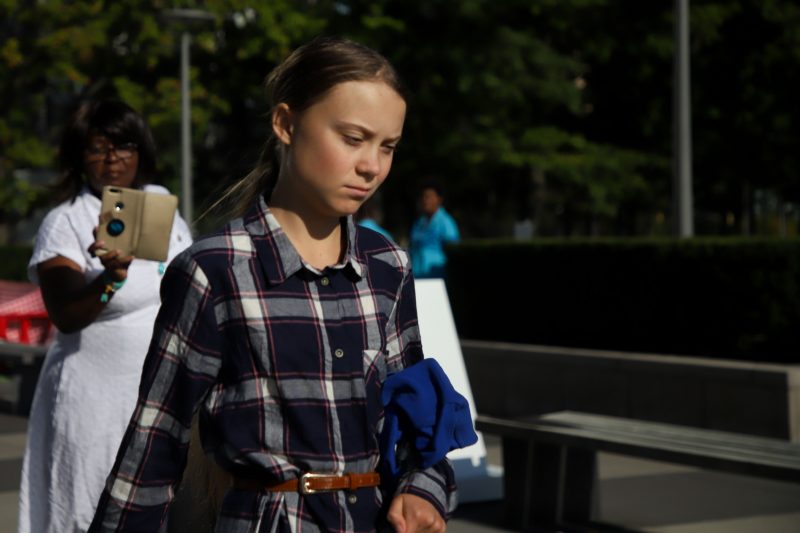 On Friday (25.10.19), Greta tweeted a snap of herself smiling as she looked off camera, a body of water and the skyscrapers of Vancouver visible in the background.

She captioned the pic: "I reached the Pacific Ocean!"

Good Morning Britain presenter Piers responded to the tweet with a sarcastic quip about "ghastly adults" and asked when she will be back in school.

He wrote: "Congrats. Looks like you're having a lot of fun despite we ghastly adults ruining your childhood. Will you be reaching school again any time soon?"

Congrats. Looks like you're having a lot of fun despite we ghastly adults ruining your childhood.
Will you be reaching school again any time soon? https://t.co/YoPcUjiDQe

But he received something of a backlash from other Twitter users, who accused him of "picking on" the passionate environmental campaigner.

One told Piers: "Does repeatedly picking on a little girl make you feel like a big man? If you don't like her, just ignore her."

Hating on a child. Not a good look.

Another said: "Aww look at you all big and powerful telling off a kid. Well done."

Someone else wrote: "I've never seen so much hatred and fear directed towards a 16 year old in my life."

But Piers went on to hit back at his critics, insisting he doesn't have a problem with Greta and worries she's "being used".

A Twitter user said: "Hating on a child. Not a good look but then you are never worried what a [bleep] you look."

He replied: "Oh, I don't hate Greta at all. I find her passion admirable, albeit her rhetoric can be very hectoring and annoying.

"But I think she's being used, and I worry about her more than her supporters seem to." 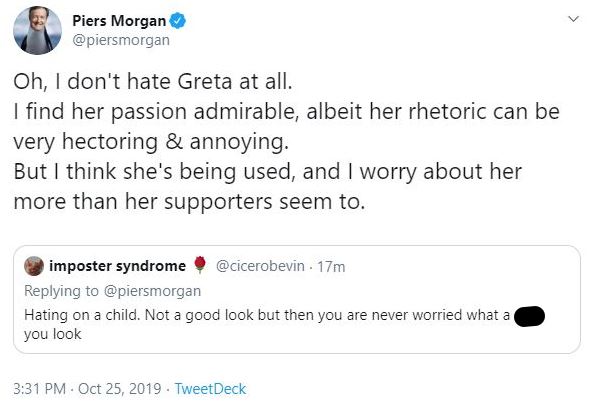 The teenager previously rose to prominence arranging weekly climate change protests outside Sweden's parliamentary buildings. Since then, she's picked up a swathe of famous supporters.

Last month, the Duke of Sussex Prince Harry praised her as he delivered a passionate speech about the environment in Botswana, where he told a crowd: "This last week, led by Greta, the world's children are striking. It's a race against time and one which we are losing."