Piers Morgan reveals the one tweet he regrets sending

He has sort of... apologised!

Piers Morgan is famous for his outrageous and oft-controversial comments – but there is one he regrets.

Back in 2016, the singer revealed she suffered from PTSD after she was raped aged 19.

Retweeting a headline about her revelation, the Good Morning Britain star replied: “No, soldiers returning from battlefields do. Enough of this vain-glorious nonsense.”

He added: “Lady Gaga & Madonna have both made ALLEGATIONS of rape many years after the event. No police complaint, no charges, no court case. 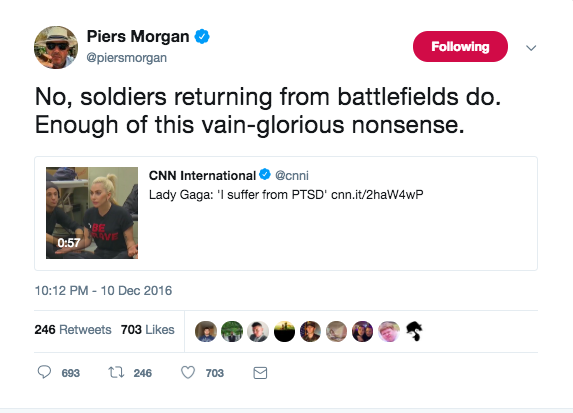 “I don’t think all claims of rape should be necessarily accepted as fact without proper criminal investigation, do you?”

Two years on, Piers admitted to the Radio Times: “I remember Lady Gaga saying she had PTSD and stuff and I launched into her and sort of implied that no one outside the military should really be claiming to get PTSD.

“I don’t think I should have been quite so dismissive of everybody. I’ve got a lot of military in my family and PTSD is obviously a real problem if you come off a battlefield but I do accept that you can have it in other forms.”

He also confessed to being “perhaps a little insensitive” and “a little too all-encompassingly judgemental”.

It’s almost an apology, isn’t it?

His semi-contrition comes just a day after his co-presenters on Good Morning Britain compared him to a “yapping” bird.

Piers was talking about budgies, saying: “I was at my parents’ the other day and they were looking after my sister’s menagerie of animals while they were on holiday, including budgerigars.

“I had forgotten just how annoying budgerigars are. Oh god the yapping that goes on. The dogs were bad enough.”

Charlotte then joked: “Welcome to our world!” as she and the rest of the presenters started laughing.

Piers replied: “Oh, it’s one of those is it? I’ve been watching you recently Hawkins. You’re building a whole cottage industry out of abusing me.”

The former journalist also caused an outcry on GMB this week by seemingly hitting out at his pals, Ant and Dec. He moaned about them winning an award for Saturday Night Takeaway – despite Ant missing two of the episodes.

Piers complained: “Ant and Dec winning everything when one half of them isn’t even there is ridiculous, isn’t it?

“At least I pitched up for work.”

There were six episodes in the last series of Takeaway, meaning Ant co-hosted four of them. Piers took to Twitter to explain that his comment was a joke, and mocked people for making out he was slamming his fellow presenter.

Do you think Piers is finally learning his lesson? Leave us a comment on our Facebook page @EntertainmentDailyFix and let us know what you think.