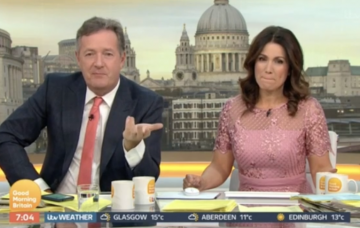 Piers Morgan was forced to apologise to Holly Willoughby after he corrected her grammar on Twitter.

Holly appeared on Monday’s Good Morning Britain and the next day, Piers tweeted that the ratings for Monday’s show were the third highest ratings in the show’s history.

But Piers pointed out that Holly had made a grammar error and responded: “It’s ‘you’re’.”

His tweet caused immense backlash, however, after fans pointed out that Holly is actually dyslexic and has been open about her struggles with spelling. 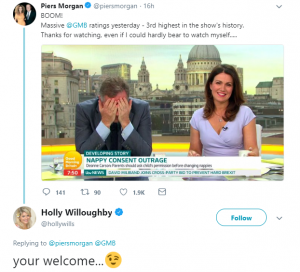 “Holly Willoughby was a guest on Monday and she immediately responded when I tweeted that we’d had huge ratings,” he explained. “But she made a slightly unfortunate error where she spelled ‘you’re’ wrong and I had to correct her.

“I felt a bit bad actually, I took it up with her, I had to apologise.”

“I was really enjoying getting her on this mistake,” Piers continued. “But then people said she’s dyslexic and has talked about it openly.

“I then had to say [to Holly], ‘I’m really sorry, are you actually dyslexic?’

“She said, ‘yes, I get everything wrong, I always get your and you’re wrong, hope they’re not giving you too much bleep.'”

Susanna asked her co-presenter: “Does that make you feel slightly bad about the fact that you’re hard on everybody?”

“No,” Piers replied. “If they get spelling mistakes then what’s the point in going to school otherwise?

“I understand if you’re dyslexic there’s an excuse, but if not there isn’t one.”

Piers’ tweet came after Holly took a cheeky swipe at him during her appearance on the show on Monday, by telling Susanna she “feels sorry” for her having to work with Piers!

Last week, sexuality expert Deanne Carson said that parents should ask their babies for consent before changing their nappies.

But Piers and Charlotte had slightly different views and started to argue about their opinions.

Holly chimed in: “I feel sorry for [Susanna]! I watch all the time and I look at Susanna’s little face! It’s so unfair.”

“It’s actually a look of adoration,” Piers told Holly. “She hides it well.”

“I’m not sure it is Piers! You’re wrong!” Holly replied.