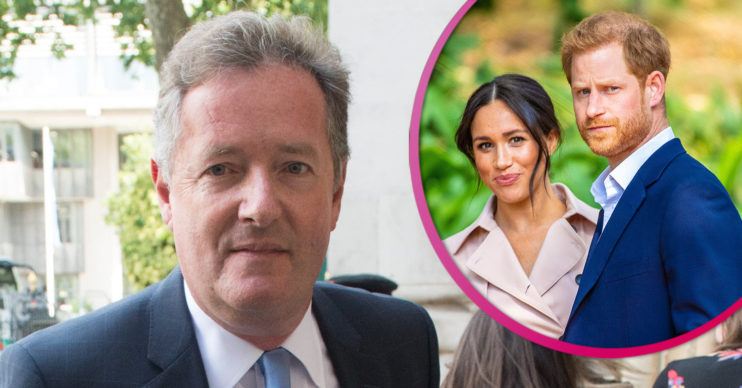 TV’s Piers Morgan has admitted he made things “too personal” with Prince Harry and Meghan Markle.

The Good Morning Britain presenter has lashed out at the couple on multiple occasions over their actions in the royal family.

Last month, he branded the couple “whiny little brats” after they announced their ‘zero policy engagement’ with newspapers.

Piers also previously slammed the couple’s decision to step back from royal life and live a more private life across the pond.

However, now it seems Piers has made a U-turn.

The star said he has probably taken some of his comments “too far”.

What has Piers said?

Discussing his comments about the couple, Piers told The Sunday Times: “Have I taken things a bit too far? Probably.

“Do I think that will govern and temper how I talk about them going forward? Absolutely.

“It’s probably not wise, if you’re a columnist, to make things too personal.”

Have I taken things a bit too far? Probably.

Piers has repeatedly criticised Meghan, previously branding her “ruthless” and a “social climber”.

He’s also lashed out at Harry, calling him a “pampered little duke” following his comments about the coronavirus crisis.

Last month, Harry said on the Declassified podcast that the efforts of Brits to raise money and help the NHS showed “things are better than we are led to believe through certain corners of the media”.

However, Piers said on Good Morning Britain: “I might remind him the world is in a war at the moment with a virus which is destroying lives and the lives of healthcare workers in this country.

“What was Harry’s contribution to this debate? Other than making it all about him again? To claim we’re all exaggerating this war.

“The brass neck of this guy, who ditched his country. [He] now lives in a Malibu mansion that I don’t think he even pays for, lecturing us that we are exaggerating a war. When we have had deaths of 80 healthcare workers.”

Piers called Harry a “a pampered little duke in his Malibu mansion”.

He said on Twitter: “Imagine announcing this in the middle of a global pandemic?