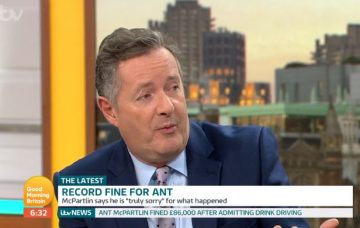 He doesn't think Ant would want or expect "sympathy"

Piers Morgan has said nobody who drink-drives deserves sympathy, but he is “sad” to  see what his friend Ant McPartlin is going through.

Ant, 42, has been fined £86,000 and banned from driving for 20 months after pleading guilty to one charge of drink-driving, stemming from a car collision in March.

He entered his plea at Wimbledon Magistrates’ Court on Monday, where he also said he was “truly sorry” for what happened.

Reacting on Tuesday’s episode of Good Morning Britain, Piers said: “I’ve known Ant a long time, worked with him, partied with him, had a good time with him, like him very, very much.

“It’s very sad to see him now going through this kind of attention. I don’t think he’d want any sympathy, he doesn’t deserve any sympathy for this episode. It’s pretty unedifying stuff.

“He couldn’t have done any more, he’s held his hands up, he’s admitted it, he’s taken his punishment. He looked to me like a slightly haunted guy yesterday.”

Piers also said: “We wish him well. He’s a good lad and I wish him all the best with what, I’m sure, has been a very difficult time for him and his family. And, as he rightfully said, just thankful nobody got more badly hurt in what happened.”

His comments were picked up by news outlets, leading him to clarify exactly what he meant.

In response to one report, which led on the line “Ant does not deserve sympathy”, he said: “To clarify, I said I don’t think anyone who drink-drives deserves sympathy, especially when they crash into cars with kids inside. Ant, I’m sure, wouldn’t want or expect any.

“But on a personal level, I’m very sad to see him like this & wish him well with his recovery.”

The court heard Ant had been twice the legal limit when his car collided with two other vehicles in Richmond, London on March 18.

He was fined £86,000, with the judge saying she’d taken into consideration his estimated £130,000 weekly salary in deciding on that figure.

His 20-month driving ban can be reduced to 15 months if he completes a drink-driving awareness course by May 2019.

Ant addressed reporters outside Wimbledon Magistrates’ Court on Monday, saying: “I just want to say I am truly sorry for what happened. Higher standards are expected of me, I expect them of myself.

“I let myself down, I let a lot of people down and for that, I’m truly sorry. I would like to apologise to everyone involved in the crash and I’m just thankful nobody was seriously hurt.”

The star returned to treatment and stepped down from current TV commitments in the wake of his arrest. He skipped the last two episodes of Saturday Night Takeaway’s last series, and will not join Dec Donnelly when the Britain’s Got Talent live shows start next month.