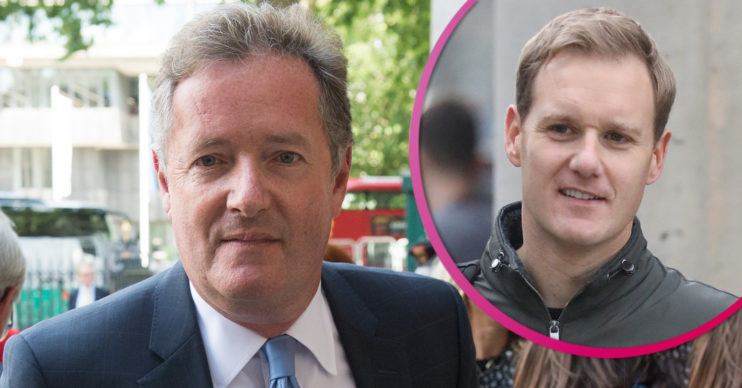 TV host Piers Morgan has had a good chuckle at Dan Walker after swearing seemed to be broadcast this morning.

Dan took to social media to issue an apology for the issue which came as Love Island Josh Denzel chatted with Crystal Palace player Wilfried Zaha.

Many viewers were convinced they heard the F-word dropped during the interview.

Josh was discussing his housemate, a Crystal Palace fan, when the odd moment occurred.

According to some of those watching at home, they heard Josh say: “The thing is, yeah, my housemate John is a massive Palace fan.

“He rowed [bleep] five marathons in five days on the rowing machine.”

The editing faux pas resulted in Dan apologising online – and coming in for some stick from Piers.

🤣🤣🤣 Stop digging that hole, Inspector Walker – we all heard what he said. https://t.co/rbduDEEQ6U

“Really sorry about the swearing you might have heard on #FootballFocus today,” Dan tweeted.

“I know a lot of kids watch the show and we are trying to work out what happened. Apologies.”

He later returned with an update in which Dan claimed a technical issue had created the problem.

Piers, however, seemed tickled by the explanation and responded with a flurry of laughing emojis.

“Stop digging that hole, Inspector Walker – we all heard what he said,” Piers tweeted.

Dan seemed to take Piers’ jibe in good humour, replying: “What a surprise… I thought you’d be along.”

But Piers was not finished with his mickey-taking, adding: “Did Dominic Cummings lead the investigation?”

Meanwhile, Gary Lineker then got involved.

He tweeted Dan: “Even though it appears there was no swearing, I’ve always been bemused as to why on television presenters are pushed to apologise for someone else’s bad language. I refuse to.”

Dan replied: “I wasn’t pushed Gary. I chose to do it because I don’t like swearing – and I thought it was at the time – and I’m the bloke sat in the chair.

I wasn’t pushed Gary. I chose to do it because I don’t like swearing – and I thought it was at the time – and I’m the bloke sat in the chair. I think we still have a responsibility to apologise. https://t.co/RiNvWasvEf

“I think we still have a responsibility to apologise.”

“But just to clarify, Inspector Walker, you apologised because you thought your guest said ‘f***ing’ (which he did).

“But have now withdrawn the apology because he told you he stumbled over ‘Five marathons’, ‘In’, & ‘For Calmzone’ & it was a dodgy zoom line?”

Dan hit back: “Your tweet is about 80% factually incorrect… which isn’t bad for you.

😂 Your tweet is about 80% factually incorrect… which isn’t bad for you.
Anyway, give it a rest, I’m just about to watch Home Alone 2 with the kids and don’t want to be disturbed 👍🏻 https://t.co/7bJRXOAWxF pic.twitter.com/jwGFk2c0mL

“Anyway, give it a rest, I’m just about to watch Home Alone 2 with the kids and don’t want to be disturbed.”

He included a photo of Piers alongside the Pigeon Lady from the movie.

In another tweet, Piers branded Dan a “Halo Boy”.

The two broadcasters regularly take aim at each other on social media.

Dan reignited their feud last month when he tweeted about how he prefers to interview politicians.

Piers has come under fire from some of his audience for his uncompromising approach during the coronavirus pandemic.

Other viewers, however, have loved how he tried to hold the government to account.

But Dan seemingly took a swipe at Piers’ style when he claimed there is no need to press politicians.

He wrote at the time: “It is possible to challenge politicians and ask difficult questions without shouting. Interrupting. Telling everyone you’re brilliant at holding them to account. Thanks for watching.”

He responded: “The reason they all go on your show Dan is because you’re known as the softest touch in world political interviewing…

“Or as the Guardian called you recently ‘LaLa from the Telleubbies… most at home asking unthreatening lifestyle questions.'”