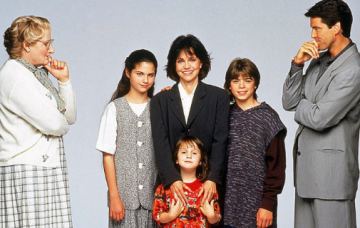 The cast of Mrs Doubtfire have got together for a little reunion to mark the 25th anniversary of the much-loved 1990s family comedy.

Lisa Jakub, Matthew Lawrence and Mara Wilson – who played the children of divorced actor Daniel Hillard who decides to fake it as a 60-something Scottish housekeeper to stay close to his family – met up earlier this week to film an interview for US new programme The Today Show.

And although star Robin Williams passed away in 2014, Pierce Brosnan – who played Stu, the new boyfriend of the kids’ mum portrayed by Sally Field – was also on hand to join the nostalgic gathering.

“So this happened,” Lisa, who played eldest child Lydia as a 14-year-old, revealed on social media as the group posed for a feelgood pic.

So this happened. #mrsdoubtfire #reunion #25yearslater

She also shared a short clip of former James Bond star Pierce comparing the film’s young stars as there were in 1993 to present day.

“And here we are… we pull back slowly and ta-da!,” the 65-year-old Hollywood favourite can be heard saying as he pans across to his former co-stars.

“Love you, love you all so much, it’s so good to be part of your lives,” he added.

And then there was this. #mrsdoubtfire #reunion #25yearslater

Later, on his Instagram account, Pierce noted: “I gathered around a table in the company of three beautiful young people, to talk about a film that has touched the hearts of so many.”

He continued: “Robin is in heaven making the angels laugh and was spoken of with the fondest of love and sweet memories.”

Sadly, Sally was unable to join the fun due to her book tour schedule.

But fans were still overjoyed to see the four actors back together after a quarter of a century and fascinated to learn what the film’s siblings had been doing since the worldwide cinema hit.

“This photo is like a big hug – so lovely to see you all together,” tweeted @popparody.

Lisa, who also appeared in 1990s blockbuster Independence Day, is now a yoga teacher and writer. Matthew, 38, went on to star in Boy Meets World and is a musician in his own band. And Mara is also a writer after starring in Matilda and Miracle On 34th Street.

The interview is expected to air on American TV network NBC next month.