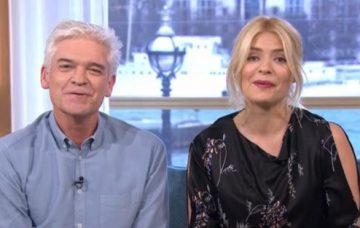 She seemed a bit reluctant to appear on camera!

Phillip Schofield’s wife Stephanie made a fleeting appearance on Thursday’s episode of This Morning.

The presenter got the cameras to swing around and focus on Stephanie, who was watching the show being filmed, so he could wish her a happy 25th anniversary.

Phil flagged Stephanie’s arrival to viewers by saying: “A lady has just walked into the studio!”

Holly Willoughby chipped in: “A beautiful lady! A hot lady! A sexy lady! Ah, there she is. Who is that, Phillip Schofield?”

A blushing Stephanie initially turned away from the camera before smiling over at Phil, as he shouted: “Happy anniversary, Steph! 25 years. Silver anniversary today!”

Stephanie was on set just as Phillip and Holly began a phone-in about moving day dilemmas.

It was in honour of This Morning temporarily moving out of its current London studio while renovation work is done.

Phil shared one of his own stories of moving, asking Stephanie off-camera: “Do you remember when we moved? And the house needed massive renovation and restoration? We were asleep and we were woken up by the builders taking our bedroom window out one morning. Remember that?”

Stephanie was seen laughing and nodding.

Holly, meanwhile, shared her own moving horror story, saying it happened when she was younger and renting a house in London with a group of friends.

They managed to get their sofa wedged in the front door, meaning they couldn’t get it into the flat or back out again.

The group also couldn’t even lock the front door!

Holly said the girls were resigned to sleeping on the floor of their living room with the front door wide open in central London, until her dad could pop down the next morning to help out.

It was a pretty big day for Phillip: celebrating his last day in the current This Morning studio for a while and his 25th wedding anniversary.

Stephanie usually prefers to stay out of the limelight, although she did join Phil on screen in Schofield’s South African Adventures last year.

The couple have two daughters: Ruby and Molly.

They met when Stephanie was working as a production assistant at BBC and Phil once joked: “You’d have thought someone wouldn’t be attracted to a man with a puppet and dodgy jumpers!”

Will you miss Holly and Phillip when they’re on their Easter break? Leave us a comment on our Facebook page @EntertainmentDailyFix and let us know what you think!