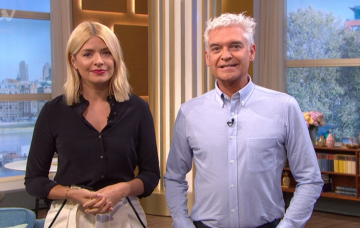 He couldn't resist poking fun at her!

Phillip Schofield has said he can’t wait to watch his best pal Holly Willoughby co-host this year’s I’m A Celebrity… Get Me Out Of Here!

It was announced on Wednesday that Holly, 37, will be jetting off to Australia later this year to present the reality show alongside Dec Donnelly.

This Morning host Phil, 56, took to his Snapchat to express his delight for his co-star, but he couldn’t help but poke fun at Holly saying she will be “scared” when she’s in the Australian jungle.

Alongside a selfie of himself grinning for the camera, he wrote: “Holly in a jungle… where everything will scare her [expletive]… literally can’t wait.”

It was confirmed this week that Holly will be Ant McPartlin’s replacement on the show this year as he takes the rest of the year off to focus on his recovery.

The mum-of-three said in a statement: “I couldn’t be more excited to have been asked to stand alongside Dec for the next jungle adventure. I love Ant and want to send him my best wishes and support for a continued recovery.”

Holly said feels like she’s “won a competition to go and hang out on my favourite show” because she’s a huge fan of I’m A Celeb.

She added: “These are big shoes, not to fill, but just to keep warm for a little bit. When is it a good time to tell Dec I’m scared of everything that moves?”

He revealed Holly was “at the top” of his list of presenters to join him on the show.

He continued: “I’m thrilled she said yes. It will be a different kind of series but we will try our best to ensure it is no less fun and eventful for our loyal viewers.

But while Holly’s busy hosting the show on the other side of the world, many fans are wondering who will join Phil on This Morning in London.

I’m A Celeb usually films across several weeks in November and December, which will coincide with when Holly would usually be filming the daytime show with Phil.

This Morning said on Wednesday that plans for Holly’s absence will be announced “in due course”, suggesting Phil could get a temporary new co-host.

Holly’s new TV venture comes after Ant, 41, announced he’s taking a break from TV commitments until 2019 as he continues to focus on his well-being after a drink-drive incident in March.