Phillip Schofield has defended Eamonn Holmes after fans accused him of "ruining" his emotionally-charged This Morning interview about being gay.

Phillip, who has been married to wife Steph for almost 27 years, stunned fans on Friday when he revealed on Instagram that he had been keeping his true sexuality a secret for years.

Minutes later, Phillip appeared on the This Morning couch and chatted to Eamonn, Ruth Langsford and Holly Willoughby about why he had finally decided to speak out. 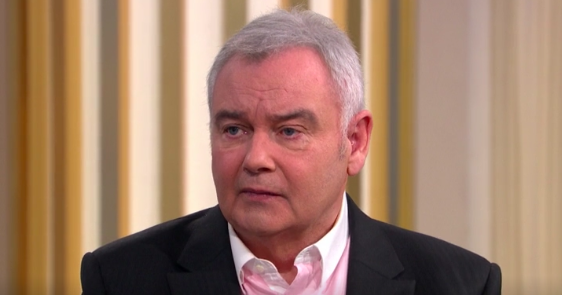 Read more: Phillip Schofield's This Morning interview with Holly Willoughby in full as he reveals he is gay

But during the chat, 60-year-old Eamonn joked that he was expecting Phillip to "come in and announce he'd resigned".

The quip, however, didn't sit well with some This Morning viewers. One tweeted: "How out of order was that hot tub comment from Eamonn Holmes?"

Another said: "I always said that Eamonn Holmes is a d***head and today just proved it with his crass, insensitive & pathetic hot tub comment. Not funny!"

But Phillip has now defended his pal, admitting he was "very happy" Eamonn lightened the moment.

Taking to Twitter, Phillip wrote: "Can I just say that @EamonnHolmes & @RuthieeL were utterly magnificent with me today, privately downstairs just the three of us and upstairs in front of the world. 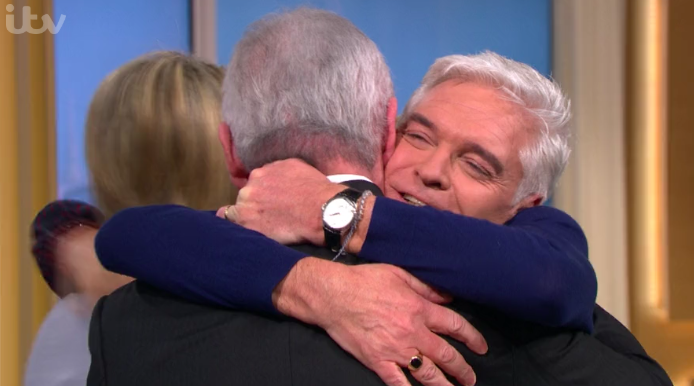 "I couldn’t have hoped for a better, calming and loving set of hugs and support, I adore them both.

"And for the record, @EamonnHolmes made me laugh, he lightened a very emotional moment and I’m very happy that he did."

Can I just say that @EamonnHolmes & @RuthieeL were utterly magnificent with me today...

Eamonn, meanwhile, shared an image of himself and Phillip hugging following the interview.

He tweeted: "A picture paints a thousand words. This is a man who was in pain, who today confided in Ruth and I and who knows we stand in support of him, his family and his sexuality ....

A picture paints a thousand words.
This is a man who was in pain , who today confided in Ruth and I and who knows we stand in support of him, his family and his sexuality .... Also unlike some, he appreciated a laugh to break the tension. @Schofe hoping you find happiness. 👏👏👍 pic.twitter.com/p7RuE7H8uY

"Also unlike some, he appreciated a laugh to break the tension. @Schofe hoping you find happiness."

Phillip had begun his interview by talking just to long-standing co-star Holly.

Holding back tears, he paid loving tributes to his wife Stephanie and their two grown up daughters - Molly and Ruby. 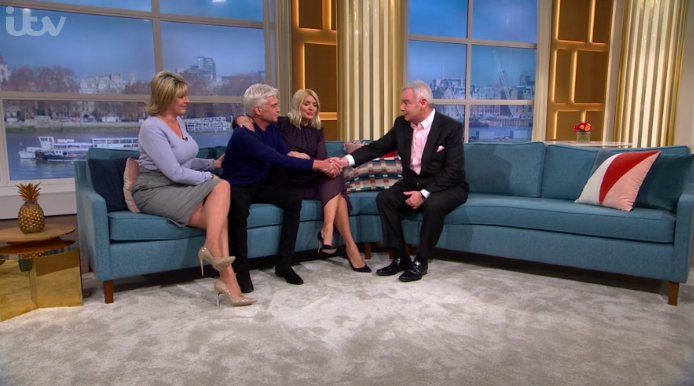 Phillip admitted his decision to come out as gay as caused 'pain and upset' (Credit: ITV)

"My entire family have grabbed us and said, 'It's okay, it's okay. We love you'," Phillip said.

"Of course I'm really very aware that there is no question - it causes pain and upset."

Speaking of how his wife Steph has been affected, Phillip continued: "It's tough, but this is not something that's happened quickly.

Read more: Phillip Schofield reveals his mum's blunt reaction to him coming out as gay

"I've had to deal with it in my head for quite some time. We've gone through this together we've been honest and open.

"I can't write in any statement what I feel about this woman.

"There is no one in my life who would have supported me the way she has. She is astonishing."