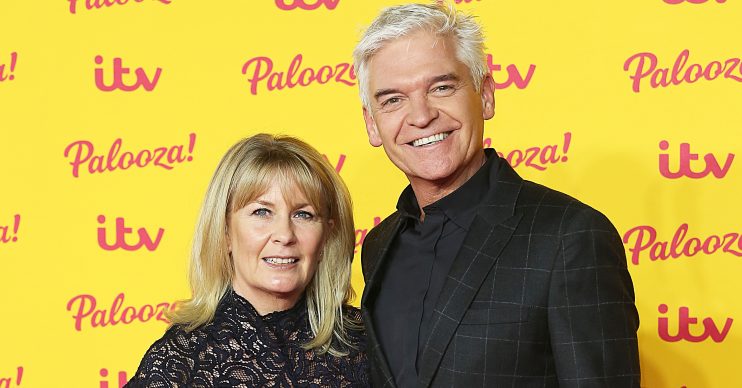 The This Morning and Dancing On Ice presenter dropped his deeply personal bombshell on social media and then on live television, with co-host Holly Willoughby at his side.

But reports claim that his wife of almost 27 years, Stephanie, has been left ‘absolutely shattered’ by the news.

The Mirror reports that Steph has been a ‘rock’ and ‘supports his decision’ but is said to be now coming to terms with what this means for her and her family.

The newspaper quotes a source, who said: “Steph is being a rock for Phillip, as she always has been, but there’s no denying she is absolutely shattered by all this.

She and the girls love him very much and will support him as much as they can, but the knowledge they have been living a lie for so long is terribly hurtful.

“She and the girls love him very much and will support him as much as they can, but the knowledge they have been living a lie for so long is terribly hurtful.

“It’s humiliating to think that you’re married to someone who doesn’t love you the way you love them.”

Steph has yet to break her silence on the matter.

On yesterday’s emotional episode of This Morning, Phil, 57, spoke to Holly, 38, about his decision and how it would affect Steph, who he shares two grown-up daughters with.

“Yeah, it’s tough, but this is not something that’s happened quickly, I’ve had to deal with this in my head for quite some time,” he said.

“We’ve been honest and open. Steph… I can’t write in any statement what I feel about that woman. She’s amazing, she’s incredible. There is no one in my life who would have supported me the way… as a wife, at the way she’s supported me. She’s astonishing, literally astonishing.”

Phil also went on to say that he wasn’t even thinking about future romantic relationships.

He told Holly: “I’m not going there. I’m doing each day at a time.”

During his interview with Holly, he paid tribute to his family.

“My family have held me so close: they have tried to cheer me up, to smother me with kindness and love, despite their own confusion,” he said.

He also revealed his mother’s reaction to the news.

“My mum is watching this today,” she said. “She’s been on the phone this morning, saying ‘hope you’re okay’.”