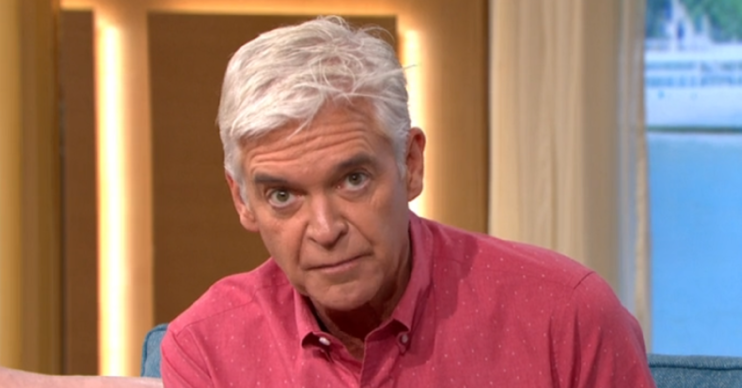 She doesn't like him going near the Spin to Win wheel

Presenter Phillip Schofield teased his pal and This Morning co-host Holly Willoughby as he insisted he “likes to live dangerously” on the set of the daytime TV show.

Taking to his Instagram Stories, Phil, 58, shared a clip from the This Morning studio that he took on his phone between filming.

How did Phil scare Holly?

In the video, Phil says, “I’m living dangerously” before angling the camera upwards. Above him is the programme’s massive Spin to Win wheel, which is hoisted up on cables above the set.

“There’s the Spin to Win wheel,” he explains. “Holly doesn’t like me going anywhere near it.”

Holly, clearly terrified, interrupts him, saying: “I don’t like you going anywhere near it. Don’t!”

Phil then laughs as Holly, looking on from the prescribed two metres, points out, “It’s swinging” before crying, “Oh my god!”

Schofe can’t help chuckling as he remains below the wheel. Holly scolds him: “Have you not seen Road Runner? Where the boulder comes down… Oh my god, get out! It’s actually shaking.”

“You’ve got to live a bit dangerously!” Phil argues.

Phil was clearly enjoying teasing Holly, but it wasn’t all laughs on the programme today.

During Thursday’s (June 18) episode, he teared up over a guest’s heartbreaking poem about his late wife.

Bob Lowe appeared on the show to discuss losing his wife of 65 years, Kath, in 2011 to Alzheimer’s.

He wrote a poem about his loneliness, which became the inspiration for the charity The Silver Line, and read it out on air.

After listening, Phil became emotional and tearfully said: “Oh! I had not heard that before. That got me, that’s for sure.”

Bob said: “It’s the sort of thing you don’t take on board for a while. I sit in the lounge and think, ‘She’ll be back in a minute’. But a minute grew to months and that was it.”