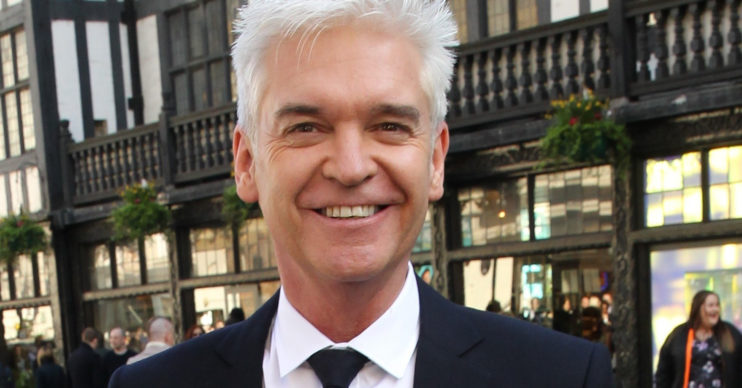 The presenter sported a hoodie from his time at Radio Hauraki

Phillip Schofield has proven just how little he’s changed in 30 years after slipping back into his work clothes from the 80s.

The 58-year-old This Morning star took to Instagram to share a photo of himself posing in a sweatshirt from his time at Radio Hauraki.

Phil came across the hoodie while rummaging through a box of old clothes at his mum’s house.

Posing in the garden, he wrote: “Just going through a box of clothes my mum saved from the 80s.

The host followed the post with an up-close shot of the hoodie, adding: “Still fits.”

Phil began his career in New Zealand after his family moved overseas.

He went on to spend three years hosting 80s music show Shazam!, and was a DJ at Radio Hauraki.

The presenter has enjoyed a long-standing TV career, but there were rumours he could be adding Strictly Come Dancing to the list.

It was reported BBC bosses are pushing for Phillip to form the first same-sex couple after he came out as gay earlier this year.

A show insider told Daily Star: “Top-secret talks have been happening for a few weeks and an offer has been made.

“The hope is Phillip would dance with another man. If it happens it would be a beautiful and important moment both for him and for the show.”

It comes after Dancing On Ice introduced its first same-sex couple last series, with Phil urging for Strictly to follow suit.

He said at the time: “What’s lovely about same-sex couples is that it’s a big deal this year and then, whether Strictly or whoever does it next year, it won’t be such a big deal.”

Sadly, Phillip has denied he will be doing Strictly this year.

Meanwhile, Phillip is making the most of  his summer break from This Morning.

The star has shared plenty of content via social media of his idyllic time off.

He recently took to Instagram to show off his BBQ skills in his country home in Oxfordshire.

And when he’s not whipping up a delicious family meal, Phil has been busy working on his upcoming book.

Life’s What You Make It, which is set for release in October, is expected to cover the lead-up to him coming out as gay.

On Instagram, Phillip said: “After being asked many times, and after many years of wanting to, I have written my autobiography. I wrote the first line of the book, in my head, when I was about 14.

“It took me until 2017 for me to finally write the first chapter and then I stopped because the time wasn’t right. It has certainly been something of a work in progress! Over the years I have been making notes of the stories and events of my life that I thought would tell my story.”