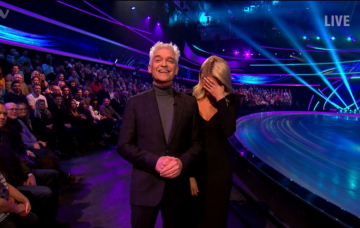 It happens to the best of us...

Usually, Holly Willoughby’s nothing but class while gracing our screens each Sunday for Dancing on Ice.

But last night, she made a hilariously blunt confession – while live on air!

After an advert break deep into the show – we’re talking a good hour at least – hosts Holly and Phil were doing a quick link to get the action restarted.

However, Phil and his on-screen partner seemed to be bickering about something else.

Phil said to Holly: “Should have gone in the break! You can’t tell me something like that just before we’re about to start and not expect me to say it.”

Holly then came clean about Phil’s mysterious comments, blurting out: “Should have gone to the bathroom before we started the show, that’s what he wants me to say!”

A clearly delighted Phil then made a jibe about Holly’s long black dress, saying: “Never in that!”

Red-faced Holly put her hand over her eyes and could only say: “The shame!” before Phil got the show back on the road and continued the link.

Later on Sunday’s show the first celebrity was voted off, in scenes some viewers found confusing.

Candice Brown faced Lemar in the skate-off and the four judges then made their decision based on the performances.

Candice and Lemar both received two votes each – with Jason Gardiner and Ashley Banjo voting for Candice, and Jayne Torvill and Christopher Dean picking Lemar.

However, Candice was eventually dumped from the show, as Phil had stated before the judges cast their votes that: “In the event of a tie, this week’s head judge Chris will have the final vote.”

Just like in Strictly where the head judge Shirley Ballas (formerly Len Goodman) is given the casting vote.

Many fans thought this was unfair on the Bake Off winner, who was understandably upset to be leaving the competition. She said: “I’m gutted. I did my best, I couldn’t have done any more.”