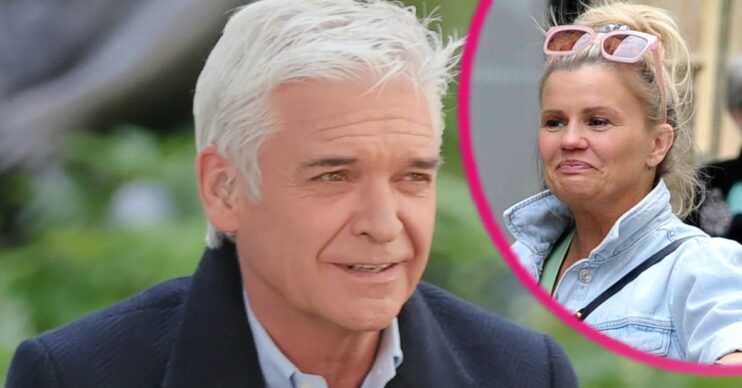 Phillip Schofield has thanked Kerry Katona after she publicly blasted their feud claims.

Rumours of a feud began shortly after the former Atomic Kitten star appeared on This Morning back in 2008.

At the time, Kerry was seen slurring her words on the show during an interview with Phillip and Fern Britton.

Earlier this week, Kerry opened up on how the interview affected her mental health.

She told the Marnie’s Home Truth’s podcast: “Never once did they say to me:, ‘Oh, oh right – what’s bipolar and what’s the medication you’re taking?’ I didn’t get any of that.

“It was just awful. I was suicidal. I wanted to die, I wanted to kill myself. It was everywhere.”

Read More: Kerry Katona admits she was left suicidal after 2008 This Morning interview

The star went on to insist there is no bad blood with Phil, 59.

Kerry, 40, went on: “I mean I get on great with Phillip now, and he’s been absolutely lovely.

“I think we’ve all learnt a lot with regards to mental health. A hell of a lot.”

However, Kerry has since slammed news outlets for bringing up their reported “13 year feud”.

The singer shared a screenshot of a recent article, which hinted at long standing tension between the two.

Alongside the post, Kerry hit back: “Hang on a minute… This is [bleep]! I have NOT been feuding with Schofe for 13 years at all!!!! I absolutely adore Phil!

We’ve been friends for a very long time!

“We’ve been friends for a very long time!

“My point of the story was how far we’ve come when talking about mental health!”

She continued: “Philip has always been so lovely, not with just me but my kids too… so please don’t believe everything you read! This has been completely twisted.”

In the comments, he responded: “Thanks darlin’, what can ya do eh. Sending loads of love and see you soon xx.”

Meanwhile, Kerry has managed to turn her life around since the interview.

The reality star is in a better place now and preparing to marry for the fourth time.

She had been due to marry fiancé Ryan Mahoney, 32, in Las Vegas this summer.

However, the couple called it off due to travel restrictions in the US.