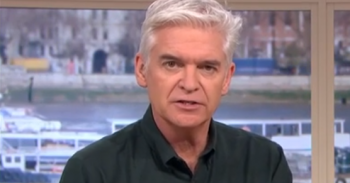 He may not be so squeaky clean after all

Phillip Schofield may be known for his charmingly PC presenting style on This Morning – but he apparently hasn’t always been this way.

Phillip, who started out as a children’s telly presenter, revealed wild nights out that involved booze and prostitutes in a resurfaced interview.

The 57-year-old told Hunger magazine back in 2013 that he wasn’t always so squeaky clean and confessed to once being “a lad.”

“I was a lad. We partied a bit, but I didn’t hide anything. It’s just that nobody bothered to look in the right place.

“By the way, when I say partying, my weakness has always been booze. I never got much into drugs, because I wasn’t very good at it,” he told the publication.

And in the same interview he even detailed a very wild lads holiday in Berlin, Germany – that involved plenty of alcohol and even a pair of prostitutes.

“We ended up drinking vodka, eating caviar with a couple of East German hookers.

“We got in the car and we drove through Checkpoint Charlie with these two East German hookers, no questions asked. God knows what the children’s television would have thought!”

Phillip started presenting on CBBC back in 1985, and transitioned into adult television hosting by the mid 1990s.

Since 2002 he’s been a regular This Morning presenter, and is particularly renowned for his great on-screen chemistry with co-host Holly Willoughby.

While they both try to maintain very daytime friendly composures on the popular ITV magazine show, sometimes Phillip’s wilder sides comes out.

He and Holly have turned up on the show severely hung over several times, and he’s also sworn a couple of times on the show – once calling Paddy McGuinness an “absolute [bleep].”

Married since 1993 to wife Stephanie Lowe, they have two daughters – Ruby and Molly.

What do you think of Phillip’s former bad boy confessions? Let us know on our Facebook page @EntertainmentDailyFix.