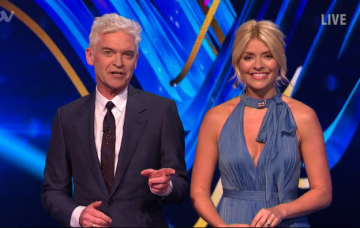 Did you spot it on Sunday?

He’s got more than three decades of presenting experience under his belt, so it’s safe to say Phillip Schofield has had his fair share of on-screen nightmares.

But, being the cool customer he is, he gets away with most of them!

Phil recently appeared on Loose Women with his professional partner Holly Willoughby to talk about the Dancing on Ice reboot.

And he revealed a funny anecdote from the show’s premiere last Sunday that most of us missed.

Christine Lampard was in the middle of complimenting Holly on the stunning blue gown she’d worn to mark her return as host.

Read more: Cheryl’s reportedly got a HUGE ultimatum for Simon Cowell – and he won’t like it

Holly said: “Thank you! It’s nice to be doing the show, just so I can wear this big princess dress.”

Phil then piped up to offer his tuppence worth saying: “Can I just interject there…

“After we introduced the judges, we walked down the ice tunnel.

“We got round the corner and we stood, and Holly turned, and the dress filled EVERYWHERE on the floor.”

“And I was standing there presenting to eight million, nine million people, and I don’t know where my foot is!

Well, Phil, it’s a small sacrifice for the rest of us to drool over her delicious dresses.