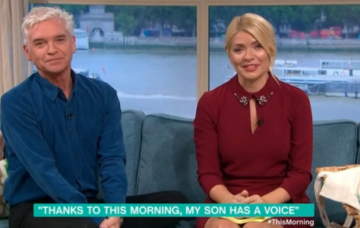 Phillip and Holly meet autistic superfan, 10, in This Morning’s most moving movement

The little boy was chuffed!

Phillip Schofield and Holly Willoughby gave a This Morning superfan the ultimate gift on Tuesday’s show.

Michael Glaister, 10, who was diagnosed with autism as a toddler, met Holly and Phil after sending a video message to the pair saying he was their biggest fan and that he wanted the presenters’ mugs.

Michael said he hopes to become a TV presenter when he’s older and even showed off his hosting skills by conducting a link following the ad break.

And he was so good that Phil said he could have his job when he’s 18!

Michael was joined in the studio by his mum Charlene, who revealed her little boy couldn’t speak until a couple of years ago when This Morning helped him find his voice.

When asked what caused Michael to start talking, Charlene said: “Just by role-playing and pretending to present and watching the shows he enjoys.

“He’s more confident now that he has speech.”

Phil and Holly then surprised Michael with a brand new iPad after his sister had cracked his old one, which he used to watch This Morning.

Phil then gave Michael a personalised This Morning case for the iPad as he told Michael: “As you are a TV presenter now and you are going to take over my job when you’re 18, we have our tablets here with our special backing for them and that is now yours.”

As Michael beamed over his new gift, Phil added: “Nobody in the world has one of those other than us two.”

Holly told Phil: “Well not even you now,” before telling Michael: “It’s just you and me, which is exactly how it will be in 18 years,” as Michael giggled.

The pair then surprised Michael with a hamper of This Morning gifts, including personalised water bottles, signed pictures and the This Morning cue cards.

Michael and his mum were also given tickets to Madame Tussauds too.

Clearly chuffed with his presents, Michael got up and hugged both Holly and Phil to say thank you.

Almost on the brink of tears, Phil said: “Bless your heart. I’ll happily give my job to you when you’re 18.”

Read more: Holly Willoughby reveals when her last day on This Morning will be

Viewers watching from home were also overwhelmed with emotion after watching Michael on the sofa and, it’s fair to say, he completely melted their hearts.

One person said: “Michael has just reduced me to tears – he was so happy with all of his This Morning goodies. His mummy must be so proud of him what a lovely lovely little boy.”

#thismorning i work with children on the autistic spectrum and Michael has just reduced me to tears – he was so happy with all of his This Morning goodies 😁. His mummy must be so proud of him what a lovely lovely little boy 💕

Another wrote: “Aww in tears at the little lad with autism on @thismorning So happy at the simplest of things.”

What a beautiful boy Michael is! Cried with love for him. Hes made my day with that beautiful smile! #ThisMorning

What did you think of Michael on This Morning? Leave us a comment on our Facebook page @EntertainmentDailyFix and let us know what you think!