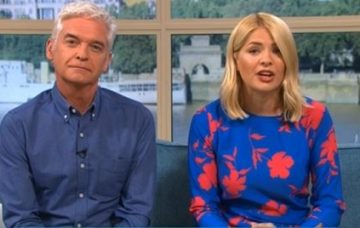 She did a "double take" at his World Naked Gardening Day snap!

Holly Willoughby has revealed her shock after coming across a NAKED photo of Phillip Schofield over the weekend.

The mum of three was merrily checking her social media over the Bank Holiday weekend when she clapped eyes on an unexpected sight!

Phillip, 56, posed stark naked in his garden in celebration of World Naked Gardening Day, and wasn’t shy about sharing the image online!

Holly, 37, brought the pic up on Tuesday’s episode of This Morning, asking viewers: “Did you see what Mr Schofield got up to this weekend?”

The snap was then shown on screen, prompting a gasp from Holly.

She told Phillip: “I actually did a huge double take when I saw that. I thought surely you’d stuck your face on… oh, no, it’s your actual body. You went for it!”

Phillip replied: “I did! It was World Naked Gardening Day.”

Holly laughed: “Of course, why not get involved?!”

Phillip said: “It was also apparently World Midwife Day, but I thought I couldn’t do a picture of that one.  The sun was out – and so was everything else!”

Phillip’s rather revealing photo was posted to Snapchat, with only a sunflower emoji protecting his modesty.

It’s not the first time he’s shared a cheeky nude photo, either!

Just last month, he thrilled fans with a naughty snap taken from his outdoor shower at a plush Maldives hotel.

Thanks to the reflective shower door glass as he panned his camera around, fans got a brief but very clear glimpse at Phillip’s bare bottom!

Fans quickly alerted Phillip to his flashing on social media, only to be given a rather surprising answer: he already knew!

When one fan asked Phillip if he was aware he’d just bared his bum in front of millions, he replied: “Course I knew!”

He told another: “What makes you think it was an error?”

Fans loved Phillip’s cheeky confession, with one declaring: “This is exactly why I love him!”

Another said: “Hahaha straight up classic Schofield.” And a third added: “I’m not on snapchat but think I’ll join just to watch @Schofe!”

Wonder what Phil will do on Snapchat next?!