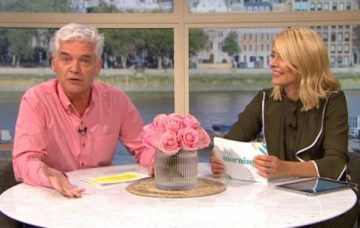 Holly Willoughby and Phillip Schofield couldn’t contain their excitement after being featured on a HUGE show in the US.

The pair made headlines overseas thanks to their psychic banana segment on Monday’s episode of This Morning, where they used the fruit to successfully predict The Duchess of Cambridge would give birth to a baby boy!

And the funny segment didn’t go unnoticed by one of the world’s biggest stars, as none other than Ellen DeGeneres spoke about it on her US TV show!

Phillip, 56, told This Morning viewers on Wednesday: “You know how some people go viral? One minute they’re unknown, then they gain worldwide fame overnight because of something they do. Well, our latest star has gone absolutely viral around the world – the psychic banana.”

A clip was then played from The Ellen Show, where Ellen, 60, was seen saying: “There is a lot of speculation about whether it’s going to be a boy or a girl, and a morning show in England successfully predict the gender of the baby with the help of a psychic banana.”

Ellen’s show then played out the This Morning clip, which saw Holly cutting into the psychic banana to determine the royal baby’s sex.

She asked the banana if Kate would give birth to a baby boy: a dot shape inside the banana meant no, and a ‘y’ shape meant yes.

When she cut in, it was a yes!

Ellen told her show viewers she’d taken inspiration and was going to experiment with some psychic bananas of her own: the first question she asked was: “are you really a psychic banana?”

But when Ellen cut into the fruit, she didn’t get any shape and therefore no answer!

Back on This Morning, a giggling Holly and Phil pointed out Ellen had cut into her banana too high, with Holly saying: “You have to go lower! I’m an expert on it!”

Meanwhile, Phil seemed tickled to have been mentioned by Ellen, saying: “I think that is one of our greatest ever claims to fame. I adore that woman. It’s fantastic!”

The funny psychic banana segment also made headlines in other countries around the world, including Australia, with outlets reporting on what happened.

This Morning came on air shortly after Kensington Palace confirmed Kate was in the early stages of labour. It went off air at 12.30pm, and less than an hour later the palace announced Kate had given birth to a baby boy.

Do you believe in the power of a psychic banana? Leave us a comment on our Facebook page @EntertainmentDailyFix and let us know what you think!