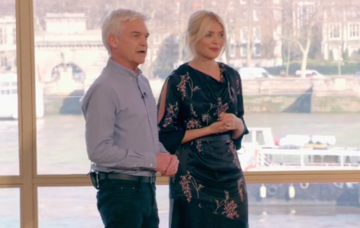 It was their last time at the South Bank centre

Phillip Schofield has said an emotional farewell to the longtime home of ITV studios.

The presenter was comforted by This Morning co-host Holly Willoughby as they marked the centre’s closing, after nearly 50 years, in a behind-the-scenes TV special called The London Studios: Home of the Stars.

In the pre-recorded show aired on Saturday (December 29), Phil struggled to talk and appeared to be fighting back tears as he reflected on his final moments at the South Bank studio.

He admitted: “I got a bit teary then. I couldn’t turn back around. It’s mad.”

Holly agreed that there was a lot to be emotional about, adding: “There’s lots of memories in these four walls. A lot has happened here.”

Phil then showed viewers a personalised cushion printed with a pic of his late dad, who passed away in 2008, taken on site.

He choked up as he reflected on the “special memories” created at the studios, which he called “the beating heart of ITV”.

But as always the pair managed to inject humour into their goodbyes, after they were collared trying to steal props to bring home as keepsakes.

Thanks, as always for my amazing clothes @davidobrien75

Holly wanted to take the clock and Phillip was after the studio sign, although he also joked about stealing one of the expensive cameras.

The hour-long TV special, presented by X Factor’s Dermot O’Leary, saw a number of other hosts share memories from throughout the years, including Eamonn Holmes, Lorraine Kelly and the stars of Loose Women, along with celebrities like Paul O’Grady, Davina McCall and Jonathan Ross.

It also featured a number of iconic clips, including footage of the Spice Girls’ first ever live TV performance.

ITV’s South Bank studios closed down in the summer to relocate to White City.

This Morning viewers were gutted last month when Phil revealed that he and Holly won’t be back together on screen properly until 2019.

#Repost @dancingonice ・・・ 🎶 Deck the halls with Phil and Holly! 🎶 Merry Christmas one and all from @hollywilloughby, @schofe and all of us at #DancingOnIce 🎄

Holly delighted audiences when she presented this year’s series of I’m a Celebrity… Get Me Out of Here! alongside Dec Donnelly, replacing co-host Ant McPartlin – although she insists her stint in the jungle was just a one-off.

It’s been a great year for Holly, who just capped off 2018 by winning the title of Beauty Icon of the Year.

Will you be eagerly awaiting Holly’s return to This Morning? Leave us a comment on our Facebook page @EntertainmentDailyFix and let us know what you think.