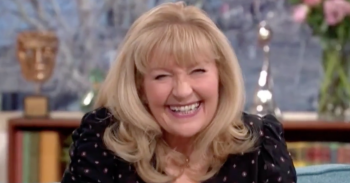 Actress Cathy Shipton got the giggles on This Morning

She plays one of the show’s longest-running characters, having been in the hospital drama for more than 30 years, and today This Morning host Phillip Schofield exposed actress Cathy Shipton’s three decade-long secret.

Cathy, who plays Casualty’s much-loved nurse Duffy, first appeared in the show back in 1986. And, noting that “people change over time, accents change over time”, Phil cut to a clip of the actress’s very first Casualty episode.

“I know where you’re going with this,” laughed Cathy.

In the clip, Duffy can be seen chatting to Charlie Fairhead, played by Derek Thompson. However, instead of the pronounced accent we’re familiar with today, the actress delivered her lines in a thick Yorkshire dialect.

As Holly Willoughby giggled beside him, Phil continued to grill the actress over her character’s transformation. “Can you actually explain what happened to that accent?” he asked.

“Well I think it travelled all over the West Country, didn’t it my lover,” Cathy laughed, adopting a Yorkshire accent.

“Okay, hands up, this was my first telly, I’d done coughs and spits and tiny little bits but you’d blink and miss me. And then suddenly you’re in the Saturday night jewel-in-the-crown TV and one of the most inexperienced actors and they ask you to do an accent,” she explained.

“Well the accent was okay but it disappeared,” Schofe laughed.

“Well yes because we got a new producer,” Cathy clarified, “and he said Duffy has been listening to loads of Radio 4.”

She added: “I went okay okay, because it meant I could be like this,” she said, referring to the accent we’re familiar with today.

It’s been a tough time of late for the much-loved character, with the nurse being diagnosed with early onset dementia in last week’s episode.

“It’s a bittersweet storyline,” Cathy said, adding: “Everything that we put on screen is based in fact. People are going through a lot of the issues we show in their lives.”

The star added of the heartbreaking storyline: “They [the producers] have taken a lot of care and they’ve consulted Dementia UK,” she said.

Cathy’s appearance on This Morning came as it was revealed that Casualty had once again been nominated for a TV BAFTA.

After winning the Soap & Continuing Drama category at last year’s ceremony, the cast and crew are hoping to scoop the gong again as they go head-to-head with Coronation Street, EastEnders and Hollyoaks at the event in May.

Casualty airs on BBC One on Saturday at 8.25pm.

What do you think of Duffy’s changing accent and her current sad storyline? Head to our Facebook page @EntertainmentDailyFix and leave a comment to let us know!