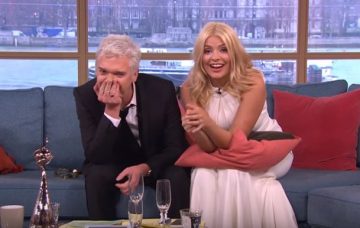 So you're totally innocent, Pip?

Phillip Schofield has joked his telly partner and BFF Holly Willoughby is a “very bad influence” on a night out!

The pair are well known for their love of a good night out… as demonstrated two years ago when they rocked up to work on This Morning still wearing the clothes from the night before!

They were forgiven, of course, because they’d been partying the night away to celebrate This Morning winning a National Television Award.

And Phil has insisted that the whole night was completely spontaneous!

Chatting to Closer magazine, he said: “The thing is, if you plan these sort of things, they’re never as good. We just go with the flow… and Holly is a very bad influence!”

Read more: Eamonn Holmes has ‘longest night ever’ as he continues to battle illness

This Morning viewers are eagerly awaiting the scene they will be presented with on Wednesday morning, the day after this year’s NTAs.

The glamorous TV awards show takes place on Tuesday evening in London and, once again, This Morning is up for the Best Daytime Programme Award.

And, adding to the excitement, both Holly and Phil have been nominated in the Best Presenter category – although they’ll be going up against each other rather than competing as a team.

Not that either expect to win it, given Ant & Dec are also nominated and have taken home the gong for the last 16 YEARS IN A ROW!

Nevertheless, Phil said: “The same amount of tequila will be drunk, no matter who wins. The good thing about the category we’re in is that everyone who’s nominated are all mates.”

Ant & Dec, Holly and Phil are up against The Chase host Bradley Walsh.

Holly and Phil have already said they won’t win, with Holly recently joking on This Morning that the Best Presenter category should be renamed as the Ant & Dec Award.

Laughing, Phil agreed: “I have never been nominated for a single NTA in my entire life. We are all mates, this is great.”

Phil turned to Holly and said: “The three of us – you, me and Bradley Walsh, there’s no point. We won’t win, we don’t have to trouble ourselves with a speech. Ant & Dec have got it – 16 years in a row!”

Phil then suggested they rehearse for the big night of the awards, quipping: “And the winners are, for the 17th year in a row… Ant & Dec!”

He and Holly then showed off their ‘losers’ clap and smile.