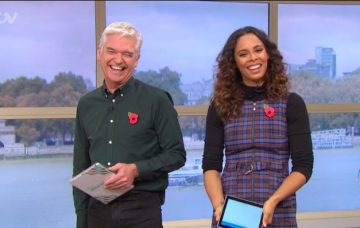 Was it funny or outrageous?

This Morning has had its fair share of funny moments, but viewers were divided over whether Monday’s episode was funny or just plain rude.

Presenters Phil Schofield and Rochelle Humes were mediating a debate on whether sex toys should be sold in Sainsbury’s.

They had two guests on the sofa, TV star Vanessa Feltz arguing that it was outrageous, and journalist Rebecca Reid insisting that it’s fine.

Will this news leave you buzzing? pic.twitter.com/pLdla7slc2

Twitter was divided by the shocking moment, with many cross at the debatable language.

Others tweeted that Phil was the “Buzz of the town now.” While another viewer wrote: “Phil was so funny today.”

The dad-of-two is not one to hold back, and just last week he clashed with another guest over whether kids should be allowed to go on dates.

In a debate with journalists Julia Hartley Brewer and Nilufer Atik, he told a cute story about dating as a child.

He explained: “When I was eight there was someone at school I quite liked. My folks set up a little table in the sitting room and she came round.

“It was like a restaurant and my mum came in and we sat down and we talked about school. There was nothing else other than the fact that I quite liked her. Nothing entered my head.”

Is this the most embarrassing moment you’ve seen on This Morning? Leave us a comment on our Facebook page @EntertainmentDailyFix and let us know what you think.