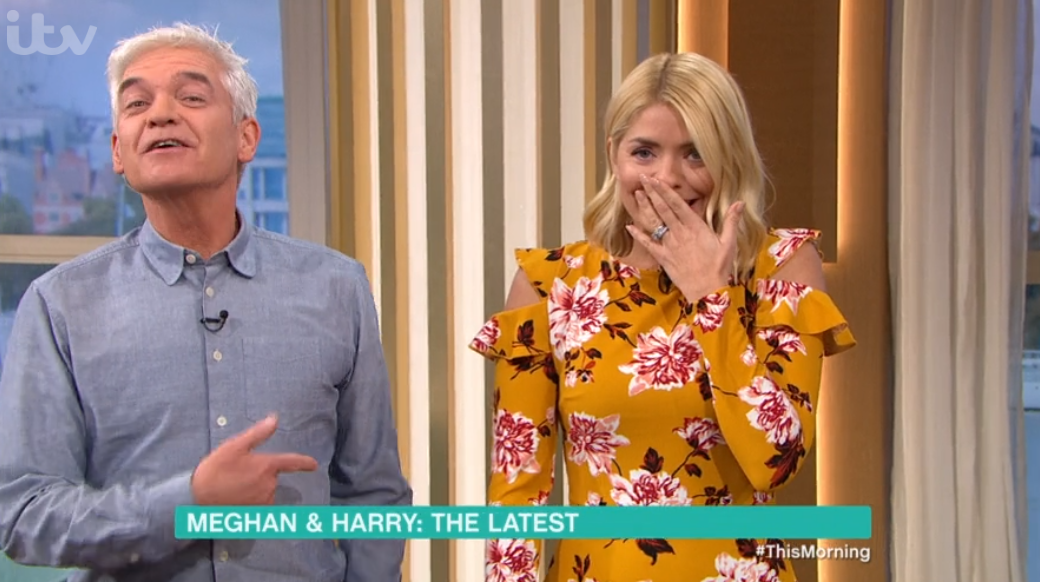 Holly Willoughby still has one more day to present This Morning before she gets ready to fly out to Australia for her I’m A Celebrity stint, but it seems her mind is already in Aussie land.

During Wednesday’s edition of the daytime show, the presenter started talking with an Australian twang without realising during a link about The Duke and Duchess of Sussex’s current royal tour in Oz.

And it was quickly spotted by her co-star Phillip Schofield, who jokingly teased Holly about her unintentional Aussie accent.

Read more: Holly Willoughby reveals when her last day on This Morning will be

Holly told viewers: “Gorgeous pictures coming out of Australia overnight as Meghan and Harry continue their tour down under with a visit to Dubbo in New South Wales.”

Phil started giggling as he said: “You literally can’t do it without an Australian accent.

“You’re going to Australia, tomorrow is your last day here… so we’ve been teasing her a bit. Today we’ve got stuck on doing some Australian accents.

Completely unaware that she had spoken in the accent, Holly replied: “I didn’t do it, did I? It’s hard to say Dubbo [without speaking in an Australian accent].”

Meanwhile, Holly slipped into the accent again as she was telling viewers what to expect on the show.

She said to the camera: “Confusing skincare leaving you in a muddle… Did I do it again? No I didn’t.”

Jokingly mocking his pal, Phil started talking in his own Aussie accent saying: “Leaving you in a muddle?

“You’re even going up at the end of your sentences now. Sheila, you’ve got to pull yourself together. We’ve got a full show to do here.”

Holly laughed: “Oh my God this is a real problem. Right, stop pointing it out and no one will notice. Don’t say anything.”

Holly will be wrapping up filming on This Morning on Thursday to head on a half-term break, and then flying out to Australia to co-host I’m A Celebrity with Dec Donnelly.

On Tuesday’s show, Holly opened up about her jungle stint.

She said: “Oh my gosh, it’s getting real now. I had a meeting yesterday with the whole I’m A Celeb team. We had a bit of a read through of a fake show as if it was a show to get used to things.”

Holly revealed she’s already practised saying “I’m A Celebrity… Get Me Out Of Here!” which she and Dec will say at the start of every show.

The duo then revealed that former Saturdays singer Rochelle Humes will be standing in for Holly while she’s in Australia.

Gushing about landing the job, Rochelle – who has co-hosted the show on several occasions before – said: “I’ll take good care of him. I’m excited!”