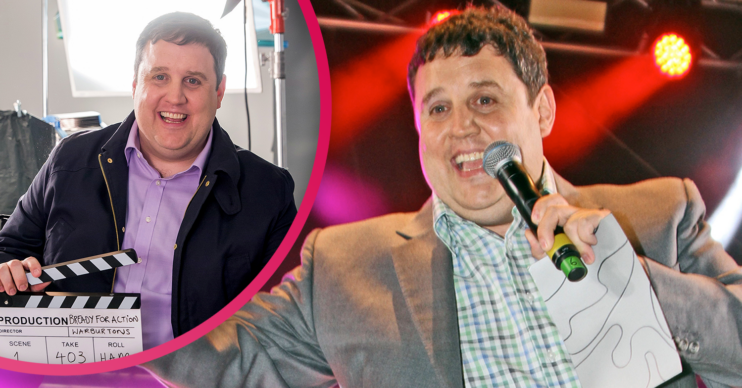 It's all in aid of charity

Peter Kay has returned to the stage to perform two gigs at the Manchester Apollo today (August 7).

The comedian was pictured arriving at the venue wearing a face mask earlier on this afternoon as fans queued round the block to take their seats.

The shows were put on to raise money for Laura Nuttall, who was diagnosed with an aggressive brain tumour in 2018.

And now lucky fans in the audience for today’s matinee show have raved about the comic’s stage return.

What did Peter Kay fans say about the Manchester Apollo shows?

One fan shared pictures of Peter on stage looking happy and healthy in a blue shirt.

Another revealed the comic had received a “standing ovation” when he came on stage.

Many many others expressed their delight at seeing Peter in the flesh after so long away from stand-up.

“First half of Peter Kay’s return absolutely hilarious,” said one fan. “So good to see him back on stage (and he hasn’t ruled out more episodes of Max & Paddy!),” they revealed.

“So glad you’re back, you’re amazing and we love you!” said another.

Read more: Why did Peter Kay step back from the limelight?

“What amazing show, not stopped laughing,” said another.

“Enjoying seeing @peterkay_co_uk back on stage for #doingitforlaura – brilliant to have him back and as funny as ever! And a standing ovation when he first came on!” another revealed.

Others said they were “weeping with laughter”.

Meanwhile, another fan revealed: “Watching @peterkay_co_uk at the Manchester Apollo.

“OMG, have missed this belly laughter in a theatre, been too long. All new content and soooo funny,” they added.

All profits go to Doing It For Laura Charity with a portion of the profits going towards The Brain Tumour Charity.
https://t.co/9A02EJGaP1
https://t.co/IQUr1OiXMp pic.twitter.com/m9oMv8e59B

So where has Peter Kay been?

Peter shocked fans when he announced the cancellation of a 122-date tour in December 2017.

He said in an announcement on social media: “Due to unforeseen family circumstances, I deeply regret that I am having to cancel all of my upcoming work projects.

Read more: The Big Night In: Peter Kay’s comeback appearance leaves fans emotional as he proves he’s still ‘one of us’

“My sincerest apologies… I’m sure you’ll understand that my family must always come first.

“I’ve always endeavoured to protect my family’s privacy from the media.

“I hope that the media and the public continue to respect our privacy at this time. Once again, I’m very sorry.”

Head to our Facebook page @EntertainmentDailyFix and tell us what you think of Peter’s comeback.