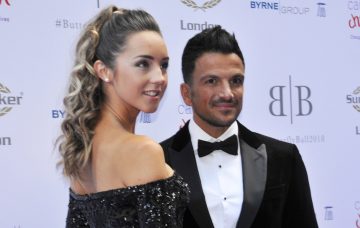 The star-studded event was held in London on Thursday night

Peter Andre’s wife Emily looked sensational as she joined him for the star-studded Caudwell Children’s Butterfly Ball on Thursday night.

Doctor Emily wore a floor-sweeping, off-the-shoulder black gown by Nadine Merabi to the event, which took place at the exclusive Grosvenor House Hotel in London.

She was at the event to support her husband, who hosted the high-profile evening.

Emily, 28, had teased details of her outfit with readers of her OK! magazine column earlier in the week, saying she’d been organised – for once!

She wrote: “I normally panic and pick a dress from Asos at the last minute, but I was a bit more organised this time.

“I’m planning to do my own hair and make-up. As much as I’d love to have it done professionally, I’m usually in too much of a rush and it’s quicker to do it myself.”

Peter hosted the event, while stars including Olly Murs and Alexandra Burke performed.

At one stage during the night, Peter took to Instagram to share a sweet selfie of himself and Emily.

He captioned it: “Emily and I at Caudwell Children Butterfly Ball. Honoured to be hosting the evening. Great cause.”

Emily and I at Caudwell Children Butterfly Ball. Honoured to be hosting the evening. Great cause @johncaudwell @caudwellchildren

Fans were quick to lavish the pair with compliments, with many describing them as a “beautiful couple”.

One said: “Gorgeous nice to see you both genuinely happy.”

Another wrote: “Emily is glowing and you don’t look too bad yourself!”

A third added: “Such a stunning couple. Emily looks so stunning but very classy.”

Peter and Emily will celebrate their third wedding anniversary in July, but Peter’s keeping tight-lipped on what he has planned!

The couple have two children, Amelia, four, and Theo, one, while Peter is also dad to son Junior, 13, and daughter Princess, ten, from his marriage to Katie Price.

What do you think about Emily’s dress? How did you celebrate your last anniversary? Leave us a comment on our Facebook page @EntertainmentDailyFix and let us know what you think!