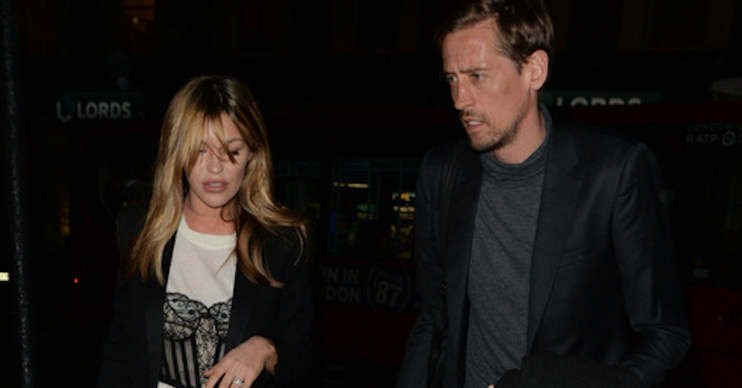 "Promise me you won't go mental?" Peter asked her before the big reveal

Angry Abbey Clancy was left fuming by footballer hubby Peter Crouch as he pranked her by pretending he got a horrendous tattoo on his arm.

The former Liverpool and England striker, 38, made out to his Strictly Come Dancing star missus he had got inked to mark the return of his That Peter Crouch Podcast.

And the prank certainly got her going – with a wound-up Abbey telling her man ‘not to come home’.

The fake tattoo showed an approximation of Peter in his recognisable robot celebration pose, along with the words ‘Back Stronger’ daubed on his skin.

But after he showed off his new body art to Abbey via FaceTime, it seemed like he might not be allowed back into his home at all.

“Promise me you won’t go mental?” Peter prepped Abbey as he worked his way up to his ‘confession’.

If that is on your arm, don’t come home.

Abbey, however, refused to give any such guarantee – and soon fulfilled Peter’s expectations about her reaction.

She exclaimed incredulously: “Oh my god. You are joking?”

Unable to recognise her own husband in tattoo form on his arm, she dismissed any possible likeness by saying: “That is you about 25 stone heavier.”

“I thought it would be funny,” Peter protested as he claimed his ‘two favourite things in the world’ are the podcast and doing the robot.

“You will look like a [bleep] on the beach, so that is down to you,” she seethed.

She then hung up on her man as he and the production crew around him collapsed in giggles.

Ringing her back, Peter owned up to having her on – but even though Abbey seemed relieved, she snuck in a cheeky comeback of her own which left her husband chuckling.

“I don’t even think David Beckham can carry off the tattoos, never mind you,” she laughed.