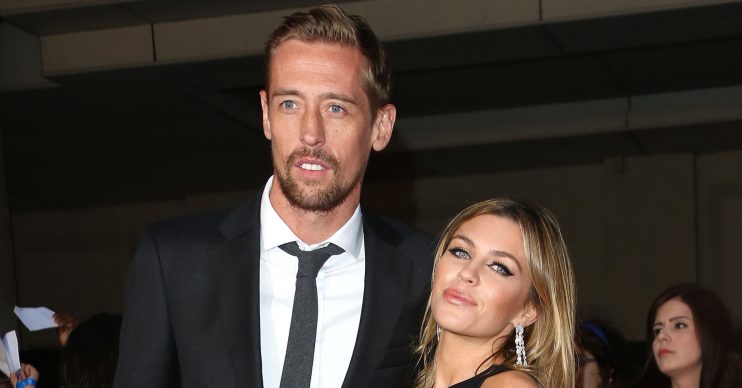 Abbey Clancy and her husband Peter Crouch have landed a presenting job together.

Model Abbey, who married Peter in 2011 and has four children with the retired footballer, will guest co-host an episode of Amazon Prime Video’s Back of the Net, a Premier League entertainment show featuring big match action, interviews and fun studio games.

Abbey will be filling in for Gabby Logan in the episode, which will be available on October 1.

The model will present alongside her husband Peter, who joins John Bishop and Gabby each week to give their take on the weekend of Premier League football matches.

Peter retired from football earlier this year, at the age of 38.

He said at the time of his retirement: “I have had 23 years to prepare for this moment but, now it is here, you realise nothing can prepare you at all.

“The time has come to refer to myself as a ‘former footballer’; this incredible journey I have been on since I was 16 is over. My ambition was to play until I was 40, so it is scary saying the word ‘retirement’.

At the time, Abbey wrote on Twitter: “Happy retirement to my darling husband @petercrouch.

“We couldn’t be more proud of you! What an incredible career you have had!

“I’ve loved watching you and supporting you over the years and will continue to do so in the next chapter of your life!! I wish you all the luck and happiness in the world!! We love you.”

The couple welcomed their fourth child in June this year, adding another little boy, Jack, to their brood.

Abbey and Peter are already parents to Sophia, eight, Liberty, four, Johnny, one.

Last month, Abbey admitted finding out she was pregnant with Jack was a “bit of a surprise”.

No idea where he gets those legs from 🙈🤣

Read more: Abbey Clancy jokes about baby Jack’s long legs as she posts picture of tot with his 6ft 7in dad

She told the Daily Mail: “It was a bit of a surprise when we found out but I feel so lucky to have them and the age gap is actually great because the two little boys are going to grow up like twins basically.

“I was one of four so it doesn’t seem too unnatural to me. It’s great, he’s fitted in really well with the family, the dynamic is great, all the others love him, there’s been no jealousy.”