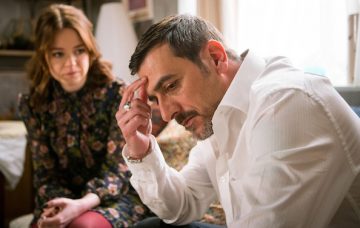 The heartbreaking first look at Peter Barlow discovering baby Susie isn’t his in Coronation Street has been revealed.

In a first look clip released on the ITV soap’s website, a tearful Toyah says goodbye to the baby she has so desperately wanted – and breaks Peter’s heart in the process.

Speaking to her niece, Toyah gives her a long list of advice to follow through her life, saying: “Never trust a man whose eyes are too close together, who drives a red car or who doesn’t like animals.

“Just try and find someone kind. And you should be kind to people too. Remember they’re just as fragile as you are inside.

“And don’t ever think you’ve got to look a certain way because you don’t.

“I would say avoid social media because it will make you miserable but I know I’m in the minority there and your mum wouldn’t agree.

“Maybe you’ll never remember this time we had together. I hope you do.

“Even if it’s just a vague feeling of my arms around you of just how much you were loved, so much.”

But as Toyah’s emotional speech came to an end, Peter walked in and Toyah had to break the devastating news to him.

He said: “My two favourite girls. What’s the matter?”

And Toyah finally told him the truth.

Sobbing, she added: “She’s not your girl, she’s not my girl she’s not Jacqui’s girl either. She’s Eva’s.”

Peter looked on heartbroken as his world came crashing down and there will only be more pain to come as he learns the full truth about what Eva and Toyah did.

Bit will he be able to hand Susie back to Eva or will there be a cobbles custody fight?

How will Peter react? Leave us a comment on our Facebook page @EntertainmentDailyFix and let us know what you think!