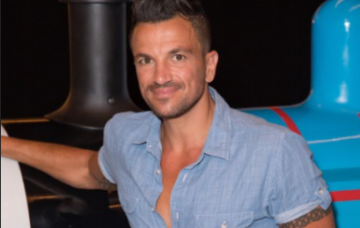 Peter Andre has confused some of his Instagram followers by showing his support for England in the World Cup.

The Mysterious Girl singer, who has an Aussie accent, shared an image of himself posing with the St George’s flag as England took on Sweden in the quarter-finals on Saturday afternoon.

His support for the Three Lions baffled some of his fans because they thought he was a born and bred Australian.

“You’re Australian?” wrote one with a laughing face emoji.

“Your teams gone home,” another told him.

But in fact, Peter was born in London and only moved to Australia as a child with his parents – who are originally from Cyprus.

Since finding fame, he’s returned to the UK where he lives with second wife Emily and their children Amelia and Theo.

Fans more clued-up on his heritage updated those who had got it wrong.

“Actually he’s not (Australian), he was born in London to Greek Cypriot parents, he may have grown up in Australia but he’s anything but Aussie,” wrote one.

“Peter Andre isn’t Australian for all saying he’s got the wrong flag, he was born in London and his nationality is British. Even if he wasn’t he lives in England, has English children and can support who he likes,” said a second.

A third added: “Peter grew up in England only moved to Australia when he was six.”

Peter has previously spoken of how he has fond memories of his childhood in London as the youngest of six children (he had four brothers and a sister).

He told The Guardian: “Mum and Dad are from Cyprus. They moved to England, where they married, and all six of us were born in the UK before we moved to Australia, where my parents still live.

“I’ve got very happy memories of my childhood in Harrow-on-the Hill, in London. My parents were devout Jehovah’s Witnesses and very strict Christians, and we also had the strictness of the Greek traditions, so we were brought up to respect your elders and always be polite.”

Saturday was a busy one for Pete, as before the England match, he attended the premiere of the new Thomas The Tank Engine film, in which he provides the voice of the character, Ace.

He took his two children, Princess and Junior – from his first marriage to Katie Price – along with him, as well as Emily and Amelia.

The father-of-four posed for pictures on the red carpet with Emily and his two eldest children but Amelia didn’t appear in front of the cameras, as Emily prefers to keep her out of the spotlight.

On the way to the event at London’s Leicester Square, Peter shared videos of the family excited for both the film and the football, singing “Football’s Coming Home” and joking about passing through Tooting on their way to a film about trains.

He later wrote on Instagram that they all had a fun day.

“Great morning at Premier today of Thomas and Friends and my new character Ace. The kids loved it. Especially Amelia as she’s four,” he said.

He later shared a snap watching the England game on a giant screen.

The tournament has clearly inspired his sons, as earlier this week he shared a sweet snap of Junior and Theo playing football.

Did you know Peter was born in England? Leave us a comment on our Facebook page @EntertainmentDailyFix and let us know what you think!