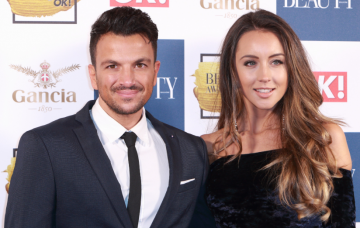 Emily Andre has insisted she will not being joining hubby Peter if he decides to move to the US.

Mysterious Girl singer and reality star Peter hopes his movie career across the pond will take off after filming scenes in Los Angeles as a heroin addict for The Inheritance.

But doctor Emily, 28, won’t be moving to Hollywood with kids Amelia, 3, and 18-month-old Theo on a permanent basis – even if Pete makes it big in Tinsel town.

In her column for OK! Magazine, she revealed life for the Andre family will still continue as normal in the UK and that the kids come first.

“I wouldn’t move over there as when you’ve got children of school age you can’t really up sticks like that,” she said.

However, Emily did add she was open to the possibility of having a place in the States to base themselves should more film roles be forthcoming.

She continued: “[I]f he does end up going out there for extended periods of time then me and the kids would go and visit him during the school holidays.”

Peter – also dad to Junior and Princess with former partner Katie Price – recently described his debut role as Harry, a former big shot who plans to kill himself, as “intense and very dark”.

“He’s a shadow of his former self – covered in tattoos and piercings and often surrounded by half-drunk bottles of tequila and used syringes,” Pete said in his New! magazine column.

“I’ll be going back later in the year to film more and I can’t wait.”

But will he be house hunting by that point?

Read the full column in OK! Magazine, out on Tuesday.